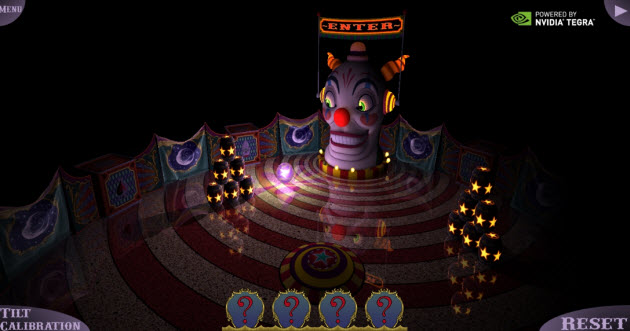 The demo shows that 3D graphics for smartphones and tablets are getting closer and closer to the same quality you see on laptops and desktops. Nvidia is moving toward closing the gap, showing that mobile innovation continues to move at a very fast clip and that games on mobile devices will look pretty cool in the near future. The demo is being shown at the Computex 2011 trade show in Taipei this week.

In the demo dubbed “Glowball,” you can roll around a ball that has a glowing light on the inside. That part of the demo shows off “dynamic lighting,” in comparison to most current mobile graphics that show only static lighting. Here, the light source moves around with the ball and you can see its effect on the environment. The light shines through the clear and purple parts of the glass ball and onto the objects around it.

This kind of dynamic lighting hasn’t been feasible before in 3D, but Kal-El has four ARM cores, or computing brains, combined with Nvidia’s 3D graphics with 12 processing cores. Still the chip is power efficient and can run on mobile devices without killing battery life.

Besides dynamic lighting, the demo shows real-time physics processing running on the four ARM cores. You can see that the life-like draped cloth responds to a sense of gravity. As you play the game and tilt the tablet in different directions, the cloth moves in response and adds more realism. On two cores, the demo doesn’t work, but it is “smooth as butter” on four cores. During the height of the demo, you can see all sorts of moving objects on the screen at the same time — the popping Jack-in-the-boxes, rolling barrels, moving drapes, and the rolling ball. That is very tough to do and takes all of the processing power of the four cores.

Nvidia’s super chip, Kal-El, can run on Android tablets running the Honeycomb version of Google’s operating system. The demo is in real-time and is not a canned animation. Kal-El is coming out this year but Nvidia hasn’t said exactly when just yet.