Nvidia said it “reinvented computer graphics” with the unveiling of its Nvidia Turing graphics processing unit (GPU) architecture. The architecture will be the foundation for a whole family of future graphics chips that will focus on real-time ray tracing, or highly realistic, physically accurate graphics.

Jensen Huang, CEO of Nvidia, said in a keynote speech at the Siggraph computer graphics event in Vancouver, Canada, that the new design is the “greatest leap since the invention of the CUDA GPU in 2006.” The architecture can process graphics at six times the speed of the previous generation.

“This is the single greatest leap we have ever made in a single generation,” Huang said in the speech.

These two engines — along with more powerful computing for simulation and enhanced rasterization — usher in a new generation of hybrid rendering to address what the company said is a $250 billion visual effects industry.

Huang said the first chip to use the Turing architecture is the Nvidia Quadro RTX 8000, Quadro RTX 6000, and Quadro RTX 5000 GPUs.

“Turing is NVIDIA’s most important innovation in computer graphics in more than a decade,” said Huang, in his talk. “Hybrid rendering will change the industry, opening up amazing possibilities that enhance our lives with more beautiful designs, richer entertainment and more interactive experiences. The arrival of real-time ray tracing is the Holy Grail of our industry.”

Turing is Nvidia’s eighth-generation GPU architecture, and it is the first ray-tracing GPU and the result of more than 10,000 engineering-years of effort. By using Turing’s hybrid rendering
capabilities, applications can simulate the physical world at six times the speed of the previous Pascal generation.

“This is a significant moment in the history of computer graphics,” said Jon Peddie, CEO of analyst firm JPR, in a statement. “Nvidia is delivering real-time ray tracing five years before we had thought possible.”

The Turing architecture has dedicated ray-tracing processors called RT Cores, which accelerate the computation of how light and sound travel in 3D environments at up to 10 GigaRays a second. Turing accelerates real-time ray tracing by up to 25 times that of the previous Pascal generation, and GPU nodes can be used for final-frame rendering for film effects at more than 30 times the speed of CPU nodes.

“Cinesite was proud to partner with Autodesk and Nvidia to bring Arnold to the GPU, but we never expected to see results this dramatic” said Michele Sciolette, CTO of Cinesite., in a statement. “This means we can iterate faster, more frequently and with higher quality settings. This will completely change how our artists work.” 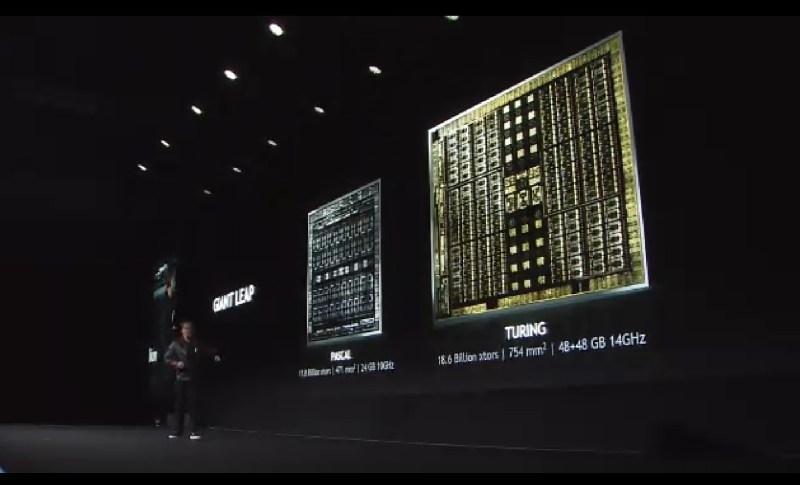 Quadro GPUs based on Turing will be initially available in the fourth quarter.