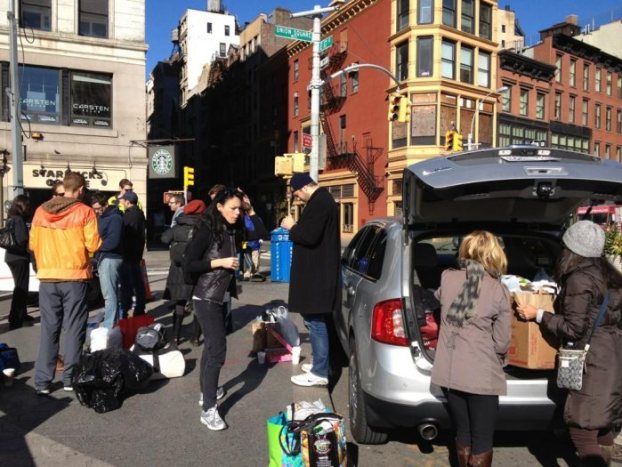 In the wake of the worst storm New York City has ever seen, the tech community here has come together to help those in need.

New York’s techies are coordinating donation efforts, co-working spaces, and their technical skills to simply do good wherever possible. They’re certainly not alone — volunteer efforts throughout the city sprang up almost immediately after Sandy, and there are so many looking to help out that they’re being turned away from shelters and other relief efforts.

But the tech community has shown that, with its particular set of skills, it can organize and deploy assistance for major disasters just as well as it does for hackathons and meetups.

The New York Tech Meetup, the city’s largest group of techies, reached out to its 28,000-plus base to build a database of volunteers willing to contribute their technical skills. NYTM is also asking local organizations to get in touch if they need any technical assistance. Now more than 30 Sandy-related hacking projects have been proposed, including NeedMapper, which aims to connect Sandy victims in need people with people who can help, and Disaster Recovery Site, a platform for dealing with future disasters. 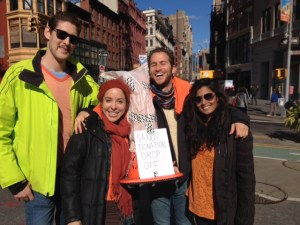 SandyBaggers, a grassroots group formed by NYC entrepreneurs, kicked off a donation drive (photo above) this morning to bring supplies to areas still struggling after Sandy. More than 40 volunteers showed up to send off several carloads of supplies to Staten Island and Far Rockaway, Queens in the first two hours of the drive. So far, it has sent five teams to Staten Island and four to the Rockaways. (If you’d like to drop off supplies, they’ll be at the corner of Union Square West and East 17th in Manhattan until 3 p.m. this afternoon.)

“We are truly grassroots and do not claim to be experts, but we have successfully created a community of smart, hip and talented people looking to make positive change,” SandyBagger’s co-founder Divya Kapasi, a consultant at DDK, said in an e-mail to VentureBeat. “We are starting with Sandy Relief, but the possibilities are endless as we start to organically grow.”

In an interview earlier today, Kapasi said that she and the other SandyBaggers co-founders, M.E.S.S. Express founder and CEO Matthew Kochman, Prance Wear co-founder Antonia Dunbar, and Fdbk co-founder Jonathan Swerdlin, were all frustrated by the current methods for offering aid. So they pulled their entrepreneurial experience together to build SandyBaggers. The group received more than 500 followers on their Facebook page in the first 48 hours and spent Saturday canvasing communities to learn what they needed. Today’s donation drive is just the first of many relief efforts the group plans to push, Kapasi said.

Noel Hidalgo, who previously served as director of technology innovation for the New York Senate, and is involved in countless projects in NYC, also created a co-working CrowdMap, allowing anyone to find a or list available office space within the city.

“I witnessed and received several communications from people with displaced teams who were desperate to find a way to get back to work,” wrote Tony Bacigalupo, founder of the co-working space New Work City, in a blog entry where he argued that such spaces could be essential to disaster recovery. “By having a place to point them to, I could easily get them hooked up with a location within biking distance that could help them get online in a timely fashion,” he added.

These are just a few of the many relief efforts being tackled by NYC’s tech community, we’ll be highlighting more throughout the day. Check back for updates!