New York is planning to build a citywide Wi-Fi network — one of the largest in the U.S. — out of its aging payphone infrastructure.

After converting 10 payphones into Wi-Fi hotspots last year, New York City’s Department of Information Technology and Telecommunications is looking to convert all of them into hubs which will power a gigantic, city-wide Wi-Fi network.

The department announced the news after issuing a Request for Proposals (RFP). It’s looking to partner with a firm to build out the free network in all five boroughs of New York.

According to the announcement, the city wants to replace “the aging network of public pay telephones with state-of-the-art public connection points.” These “points” will offer free outdoor Wi-Fi, while simultaneously still supporting 911 voice calls. According to New York mayor Bill de Blasio:

“This administration has committed to making New York City work better for every community, and this RFP for free outdoor Wi-Fi is a down payment on that promise,” said Mayor Bill de Blasio. “For years, the question was, ‘What to do with payphones?’ and now we have an answer. By using a historic part of New York’s street fabric, we can significantly enhance public availability of increasingly-vital broadband access, invite new and innovative digital services, and increase revenue to the city—all at absolutely no cost to taxpayers.” 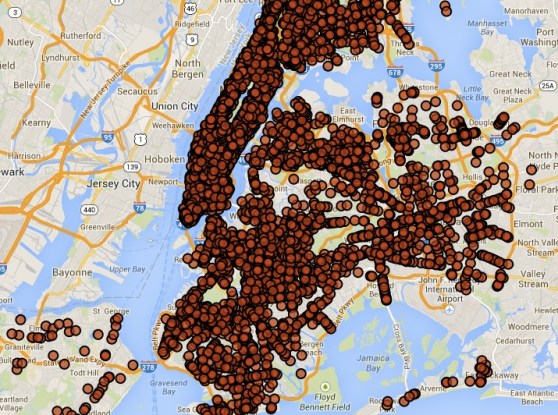 Above: Payphone density in NY

Yes, New York still has working payphones across the city. The debate over what New York should do with them is quite old. The city launched the Reinvent Payphones initiative last year in order to crowdsource ideas for upgrading the city’s payphones.

It appears, however, that the results of the Reinvent Payphones initiative have been scrapped in favor of a simpler goal: converting New York’s approximately 11,000 payphones into hotspots.