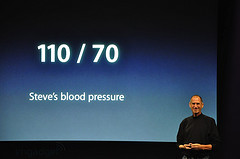 Several years ago, Steve Jobs was diagnosed with a treatable form of pancreatic cancer. After a short leave of absence, Jobs was pronounced healthy, wealthy and wise. Except now, Jobs is sick again. And taking a leave of absence. Again. But is it the big “C”?

Two people who are familiar with Mr. Jobs’s current medical treatment said he was not suffering from a recurrence of cancer, but a condition that was preventing his body from absorbing food. Doctors have also advised him to cut down on stress, which may be making the problem worse, these people said.

Sure, this could be true. Or it might not. There has been so much crosstalk and misinformation about Jobs’ health, both from Apple and the rumor mill, that I don’t know what to believe any more.

First Jobs had a “common bug“, then a “hormone imbalance” which was easily fixed. Now the situation has become more “complex” and Jobs is taking a 5-month medical leave. Why would, or should the press — or AAPL shareholders — believe anything anyone says about Jobs now?

Anyway, given the state of the information surrounding Jobs, and how every time I turn around the situation seems to be worse than the day before, I would be very surprised if Steve Jobs were to return to Apple in any sort of day-to-day capacity at any point, never mind in June.

And maybe it’s better that way.