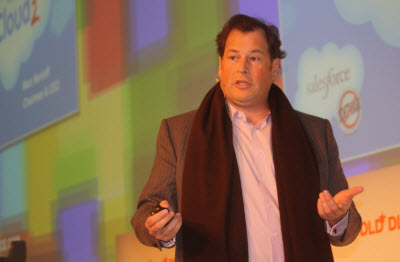 President Obama’s busy trip to Silicon Valley included a private fundraiser at the home of billionaire Marc Benioff, CEO of Salesforce.com, and a town hall meeting with Facebook chief executive Mark Zuckerberg at the Palo Alto, Calif. headquarters of the social networking firm. I felt his impact by getting stuck in the “Obama jam,” as the accompany traffic snarl in San Francisco was called.

Obama’s second pilgrimage in two months to tech magnates here will no doubt help the coffers of his second presidential campaign. It shows that Obama is willing to invest time in a region that is always up for grabs when it comes to siding with Democratic or Republican candidates. If he wins Silicon Valley over, he can get his picture taken with young Zuck, be associated with cool companies and win the youth vote. That was one of the strategies that put him into the White House in the first place.

Is it a little arrogant to think that Silicon Valley could get the next President of the United States elected? Of course. But the thinking is right, and the close association with the President ought to do wonders for tech policy causes. Those include a wide range of issues, including communications spectrum policy, Net Neutrality, clean energy, restrictive immigration laws for tech talent, cyber security, the dearth of engineers in the U.S., and business taxes. If Obama tells the tech industry what it wants to hear on those issues, Silicon Valley will be more liberal than ever.

Benioff’s dinner raised more than $2 million for the Democratic National Committee and Obama’s re-election campaign. Benioff said, “He gets tech and we need to work with him.”

The tech execs are climbing over each other to have the privilege of having their moment with Obama.

According to USA Today, Benioff’s dinner included guests such as Evan Goldberg, co-founder of cloud-computing firm NetSuite; Yelp CEO Jeremy Stoppelman; Drew Houston, CEO of online-storage vendor Dropbox; Craigslist founder Craig Newmark, angel investor Ron Conway and venture capitalist Sandy Robertson. Stevie Wonder sang to the crowd. About 60 people paid $35,800 each to dine at Benioff’s. With results like that, you can bet that Obama will be back.

“I’m not a political person. I don’t consider myself a Democrat or Republican, but I am an American,” said Benioff. “But I do like the president. He’s had a rough couple years and done a good job.”

Benioff said the idea for the fundraiser came from a “political operative.” Whoever it was, the timing was good. Good times have come to Silicon Valley, and if we’re in the midst of another tech bubble, as some have argued, then Obama better raise his funds while the going is good, before the next crash.

“I’ve got a lot of friends in this room,” Obama said. “Some of you are involved in startups. Well, I was a startup not so very long ago … So many of you took a chance on me, and it was not at all likely I was going to win.”