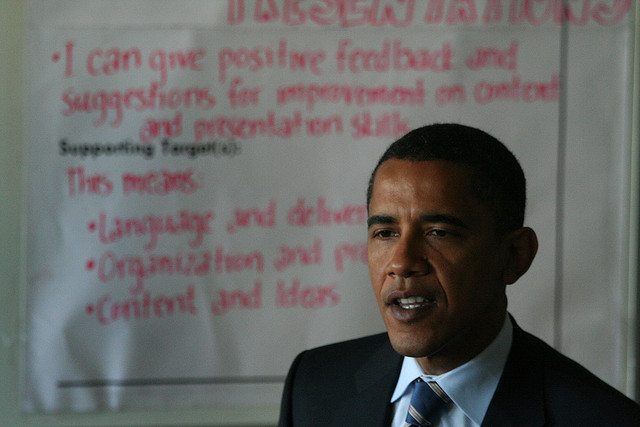 President Obama made a visit to a school in Mooresville, North Carolina today and announced an ambitious plan to get 99 percent of American students connected to lightning fast Internet within five years.

So the administration is putting pressure on the Federal Communications Commission (FCC) to bring lightning fast Internet to schools across the country and boost access to technology and devices.

“I’m issuing a new challenge for America – one that families, businesses, school districts and the federal government can rally around together – to connect virtually every student in America’s classrooms to high-speed broadband Internet within five years, and equip them with the tools to make the most of it,” President Obama said today in a statement to the press.

Obama asked the FCC to revamp its E-Rate program, which subsidizes Internet services for schools and libraries, but only those that meet its criteria. The goal for the administration is to provide institutions with stable Wi-Fi networks and high speed broadband with a target of 1 Gigabit.

Funds for the program, dubbed ConnectED, will come from consumers, the New York Times reports. Expect to pay an extra $5 a year on phone bills. The FCC will also be asked to improve the efficiency of its $2.2 billion fund dedicated to schools and libraries.

In a 2012 report on connectivity in schools, the FCC found 80 percent of E-Rate recipients did not find their broadband to be sufficient, with 78 percent saying they needed more bandwidth. To address this problem, the agency recently hired a director of Digital Learning, Michael Steffan, who previously oversaw the creation of the Connect America Fund, a broadband infrastructure program for rural America.

Through the ConnectED initiative, the administration hopes to get more devices into the hands of teachers and students. The goal is to bring “blended learning” models to the classroom, meaning that lessons will be taught online and in the physical classroom. Districts will be in control of their own purchasing.

The plan is to use existing funds from the Elementary and Secondary Education Act to cover professional development to “help teachers keep pace with changing … demands,” a White House spokesperson writes in a background memo to the press.

In addition to expanding access and keeping costs down, another goal of ConnectED, a White House official said, would be to keep better track of student data.

This is the most controversial portion of the proposal, given the recent reaction from parents to inBloom, a startup with a database filled with millions of schoolchildren’s digital records. Reuters reports that parents fear the information will be abused, and that student records might get hacked.

The biggest challenge of all for school districts is the sheer morass of startups and technologies on the market. It’s not always clear what’s working. As the Huffington Post points out, education technology is so unpalatable that voters in Idaho demanded that the government’s computer program for schools get shut down as it gave Hewlett Packard a $180 million contract. Meanwhile, in Los Angeles, 600,000 schoolchildren will receive iPads in a major effort to promote digital learning.