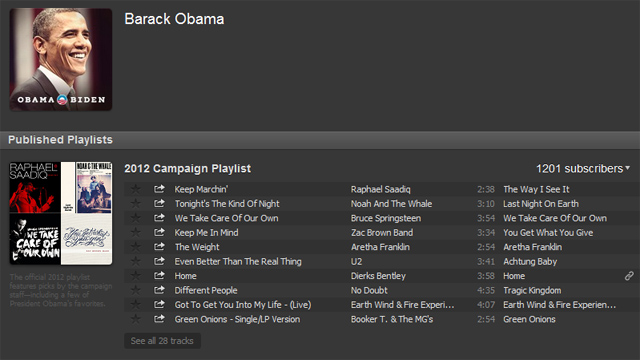 Many analysts think President Obama won the 2008 election partly due to his campaign’s ability to use social networks and the web to rally and influence voters. And now with the 2012 election season upon us, Obama is showing he still gets it with the release of a subscribe-able 28-track Spotify playlist.

Obama’s official Twitter account today posted a new Spotify playlist titled “2012 Campaign Playlist” with the message: “A little Wilco, a bit of No Doubt—check out what else made it onto the new official #Obama2012 campaign playlist.” We’re sure Spotify, one of the most-buzzed-about streaming music services, is thrilled with this endorsement of sorts.

Tracks on the playlist come from multiple genres and stretch back several decades. Artists include mega-stars like Bruce Springsteen and Aretha Franklin, indie rockers like Wilco and Arcade Fire, and classic rockers like Electric Light Orchestra and REO Speedwagon. For some reason, there is also quite a bunch of country featured, with Zac Brown Band, Dierks Bently, and two songs apiece by Sugarland and Darius Rucker.

However, it’s a little disappointing to have so much country and not a single hip-hop track, not even from mainstream acts like Jay-Z, Dr. Dre, Snoop Dogg, or Kanye West. Voter targeting much, Obama campaign staff?

What do you think of Obama’s Spotify playlist?