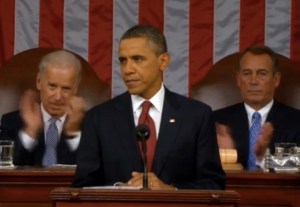 In his State of the Union address Tuesday night, President Obama recognized startups and entrepreneurs for innovating and creating new jobs, while calling for reforms that would support everyone who “aspires to become the next Steve Jobs.”

The speech focused heavily on leveling the playing field between the U.S. and other countries so that America’s economy could be more competitive, and included key calls to action that would directly affect the startup community. He asked for an end to regulations that prevent entrepreneurs from getting financing, tax breaks for small businesses creating jobs, immigration reform, and more training for technology jobs.

There were some Silicon Valley notables in the audience. Instagram co-founder Mike Krieger was a guest, mostly likely invited to drive home the dual points that startups create jobs and responsible immigration reform creates startups. Also in the First Lady’s box was Laurene Powell Jobs, Steve Jobs’ widow. Obama name-checked the Apple co-founder while talking about the importance of encouraging talented people in business:

An economy built to last is one where we encourage the talent and ingenuity of every person in this country… we should support everyone who’s willing to work; and every risk-taker and entrepreneur who aspires to become the next Steve Jobs.

Obama wasn’t the only one to drop the late Steve Jobs’ name for dramatic effect. In the Republican response immediately following the State of the Union, Governor Mitch Daniels of Indiana used him as an example of the kind of businessman Obama is supposedly against.

Contrary to the President’s constant disparagement of people in business, it’s one of the noblest of human pursuits. The late Steve Jobs, what a fitting name he had, created more of them than all those stimulus dollars the President borrowed and blew.

On the topic of startups and innovation creating jobs, Obama had this to say:

Innovation is what America has always been about. Most new jobs are created in start-ups and small businesses. So let’s pass an agenda that helps them succeed. Tear down regulations that prevent aspiring entrepreneurs from getting the financing to grow. Expand tax relief to small businesses that are raising wages and creating good jobs.

Obama cited the need for job training to meet our current needs, applauding existing partnerships, like those between companies such as Siemens and community colleges, that provide specialized job training:

Growing industries in science and technology have twice as many openings as we have workers who can do the job.

Obama asked for immigration reform for non-citizens already in the country, especially children and educated immigrants with skills and ideas that could contribute to the economy. The solution, a law that allows them to earn citizenship, isn’t a new idea. The DREAM Act, which would give some immigrants who arrived in the U.S. as minors a path to citizenship, was reintroduced to the Senate in May 2011.

Hundreds of thousands of talented, hardworking students in this country face another challenge: The fact that they aren’t yet American citizens. Many were brought here as small children, are American through and through, yet they live every day with the threat of deportation. Others came more recently, to study business and science and engineering, but as soon as they get their degree, we send them home to invent new products and create new jobs somewhere else.

The President also announced the creation of a Trade Enforcement Unit to crack down on practices by other countries that he feels have negative impact on the U.S. economy. The unit will focus on counterfeit goods and monitoring unfair trade between the U.S. and other countries, with a special focus on China.

It’s not right when another country let our movies, music, and software be pirated.

No mention was made of the recent pushes by lawmakers to crack down on pirating of American movies, music, and software with the SOPA and PIPA bills.