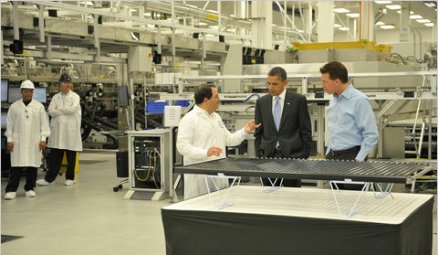 President Barack Obama, in Northern California this week to campaign for Senator Barbara Boxer (D-Calif.), made a stop Wednesday at cylindrical solar module maker Solyndra, to promote the climate and energy legislation that made its debut in the Senate several weeks ago, and to throw his weight behind the company, which has encountered hurdles on its way to an IPO.

“The foundation of economic growth will always be companies — like Solyndra,” he said in prepared remarks, acknowledging a row of orange and yellow-vested construction workers lining the back of the company’s unfinished facility.

The last time the high-profile political set visited Solyndra, the venture-backed company announced that it had received a massive $535 million loan guarantee from the U.S. Department of Energy to expand its manufacturing facility in Fremont, Calif. It seemed somewhat likely that Obama would have another major announcement today, regarding either the company or the Energy Department’s aggressive funding agenda — especially on the heels of Tesla’s bold announcement that it would be acquiring the NUMMI automotive plant in Fremont (just down the street from Solyndra), to build electric vehicles with Toyota. But nothing big was unveiled.

Instead, Obama took the opportunity to meet and greet leaders in the Bay Area green technology circuit, address the BP oil spill crisis in the Gulf of Mexico, and emphasize his support for the climate and energy bill that would put a price on carbon and set new quotas for renewable energy generation. Speaking in front of Solyndra solar panels, made with its patented cylindrical technology, was a good photo opportunity for the president. But he also scratched the company’s back, giving it a PR boost in what has become a somewhat rocky time.

The outlook was bright at the end of December when Solyndra filed to go public. Even though it was still reporting quarterly losses, it looked like it would be able to ride the momentum generated by the A123Systems IPO in September (after all, that company was in the red at the time of its sale too). But since then, A123 has seen its stock sink below its debut price. On top of that, auditors retained by the Department of Energy determined that Solyndra’s mountain of debt and quick burn rate could run the company into the ground within two years — a finding they have stapled to its S-1, endangering the pending $300 million IPO.

Obama’s decision to drop into its headquarters demonstrates that Solyndra still has political capital to spend, and, perhaps, that the DOE won’t let it go bust without a fight. This goodwill from Washington could be enough for investors to believe it will get over the hump. But then it will need to start churning out solar modules like mad to get out of the hole it’s dug for itself.

None of this was included in Obama’s speech today, which hit the same high points as his cleantech speeches always do: the need to break dependence on foreign oil, the potential for a new green economy to generate thousands if not millions of jobs, and the importance of holding onto our technological leadership in the world (although he seemed a bit emphatic on this last point than usual, underscoring that China, India and Germany are gearing up to trounce us in solar and other green markets).

“Our competitors are waging a historic effort to build clean energy sources,” Obama said. “China and Germany are right now building facilities just like this one. No one is playing for second place. He who leads the green economy will lead the world economy, and we risk falling behind.”

There were a couple aberrations from the usual  script, however. First, he spent some time discussing the oil spill off the Gulf Coast, which has quickly become a disaster-scale political issue. Apparently, Energy Secretary Steven Chu is on site at the spill, working closely with officials and scientists to stop more oil from leaking into the water.

“Now we have the spill in the Gulf, which is just heartbreaking, and underscores the necessity of finding alternative sources of fuel,” the president said. “Oil companies are now drilling a mile into the earth before they hit oil. The increased risks, the increased costs — it all gives you a sense of where we’re going. We won’t be able to sustain this kind of fossil fuel use.”

He said the plan now is to plug the seeping oil well with densely-packed mud. Whether or not this will serve as a long-term solution is unknown. “We will not rest until the well is shut and the environment is repaired,” he said.

He used these goals to segue into an endorsement of the DOE’s current funding strategy — a roadmap that has come under attack from conservative critics, and may be threatened if Republicans make significant gains in the mid-term elections later this year.

“A year ago, this was an empty lot,” he said of the Solyndra manufacturing plant. “Through the federal Recovery Act, this company received loans to build this facility. And more than 3,000 construction workers have been employed building it.” He noted that the company plans to hire 1,000 permanent workers when the factory is completed.

He also touched briefly on Tesla’s acquisition of the NUMMI plant, emphasizing that it is the $465 million loan the company received from the Energy Department that made the deal possible.

“We are making progress, but we still have more work to do,” Obama said. “That’s why I am going to fight to pass comprehensive climate and energy legislation in Washington, and we’re going to get it done this year. I want to create incentives that will fully unleash the potential to grow technology and jobs in this sector.”

At the end of his fairly brief remarks, the president shook hands with key members of the audience — which included more than Solyndra executives and employees. In addition to California Governor Arnold Schwarzenegger, the crowd was populated by other business leaders in the green sector, working on biofuels, grid technology and more — some of which are currently seeking financial support via the DOE’s various programs.