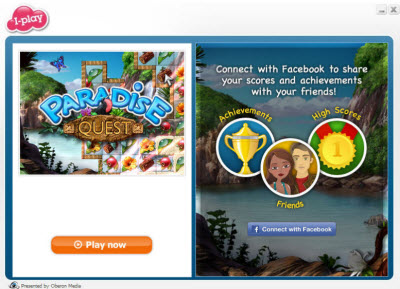 Chasing the popularity of social network games, Oberon Media is announcing today that it is adding social features to its casual games on a variety of platforms.

Founded in 2003, New York-based Oberon has a game distribution platform for casual games. It is also one of the biggest publishers of casual games that you can download from web sites or play on smartphones. With such games, players used try them out and then decide whether to pay $19.99 to download full games. But prices have dropped to about $6.99 a game thanks to competition from free-to-play games on social networks, where publishers make money charging for virtual goods.

Oberon is adapting to that new reality, adding connected social features to its downloadable games for web sites and smartphone games as well. The company plans to instill social features — such as the ability to add friends, share achievements, and suggest games — in its games on every platform. It will rely on Facebook Connect to allow players to link to their social networks. Today, most of the company’s 50 million monthly unique users are paying $6.99 a year subscriptions for their games. But those users are likely to be monetized in different ways in the future, including through virtual goods paid for with micro-transactions.

“Every single game that we are launching has social features,” said Ofer Leidner, co-founder and chief  strategy officer of Oberon, in an interview. “This shift is happening across all networks.” 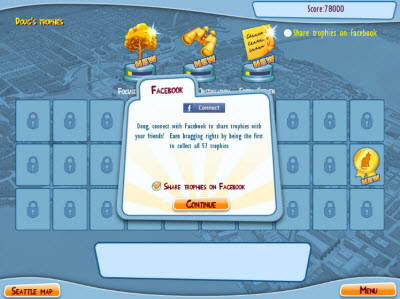 Two new games that have these social features are City Sights: Hello Seattle and Paradise Quest, both published by I-play, Oberon Media’s publishing division. Oberon distributes its games to lots of portals with millions upon millions of players. Once it launches its first two social games, it will roll out its social features to the partners who use its Game Center games. It will allow the partners — such as Yahoo and Microsoft — and developers to use its Social SDK to add social features to their games and allow for the creation of premium social games. That strategy will unfold over the next quarter.

The Social SDK is more than a pure wrapper, but something that game companies can use to create social games from scratch, Leidner said.

The strategy is an attempt to deal with stagnation in traditional casual games and catch up with the fast growth of pure social game companies, such as Zynga, Crowdstar and Electronic Arts’ Playfish on Facebook. But the strategy is based on the believe that high-value social games will spread beyond Facebook to a wide variety of platforms, and that’s why the Facebook Connect strategy is important, Leidner said.

“We believe games on all platforms and for all audiences will eventually leverage social components,” said Tony Leamer, vice president of marketing at I-play, which has launched other social-connected games such as Artist Colony, a mobile game, and Bubble Town: Party Planet, a Facebook game.

Oberon’s investors include Goldman Sachs, Morgan Stanley and Oak Investment Partners. There’s a wide variety of competition out there, from Zynga on Facebook to Big Fish Games on the web. Oberon has more than 400 employees. Roughly 30 percent are dedicated to creating pure social games, Leidner said.

Leidner acknowledges that everyone in the game business, hardcore and casual alike, is moving toward social.