The company has gained four million subscribers in less than eighteen months, mostly in South East Asia, many of whom are using it as their only way to access the Web. Significantly, this is not a technology company. It is using standard technology, and following through with a clean execution.

Its traction is impressive considering the company has paid less than $20,000 in marketing costs — according to chief executive Steve Goh.

Customers can use it on standard phones, to text and IM for free, and to share information in chat rooms. Mig33 gets paid when customers buy a pre-paid phone card, to use for voice services. While the voice calls themselves are made over the Internet (VoIP), and so very cheap, Mig33 takes a small cut for the service. The company did not specify how big its cut is. The company has just moved to Burlingame, Calif., from Australia.

While other companies offer various aspects of its service — eBuddy offers mobile chat, for example — Mig33’s advantage is that you don’t have to close your voice or text application to access its IM service. You can do all three in one session. See screenshots below. The service is downloaded via an SMS message, making it simple — and viral.

In most of the more than 200 countries where it operates, users don’t rely on the same sort of entrenched mobile carriers we are used to here in the U.S. In many countries, many people rely on pre-paid cards for making calls.

One notable trend is that most of its Mig33’s users are using the company’s own IM service, instead of opting to use more popular IM services, such as Yahoo Messenger, Google Talk, or MSN, which Mig33 does let its users choose. More than 75 percent of subscribers are choosing Mig33’s IM services. They’re sending more than 15 million messages a day. Mig33 also offers users a way to create a profile and to share photos. 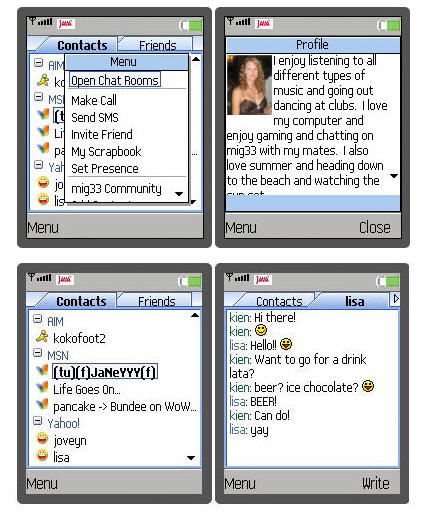