Facebook’s Oculus division has been working on making virtual reality into an easier, more accessible, and hassle-free experience. The result is the Oculus Go, which you can use with no PC connection and no wires.

The Oculus Go can’t run some of the beefiest virtual reality applications that have been made for the more powerful Oculus Rift with Touch controllers. But that’s OK, because the Oculus Go brings the power of mobility and wireless connectivity to VR. That’s important when it comes to making VR easy to get into for people who have never used it before.

It’s a big tradeoff that will divide VR fans in the coming months. But at $200, the Oculus Go is far cheaper and a lot more mobile. You don’t need an expensive PC to go with a pricey headset. It could go a long way toward making VR a more mainstream tech.

You don’t have to snap in a phone, attach a cable, or power up a PC. It’s just ready to go, and, as Oculus itself says, that makes it the easiest way to get into VR. All you have to do is sync a phone at first. 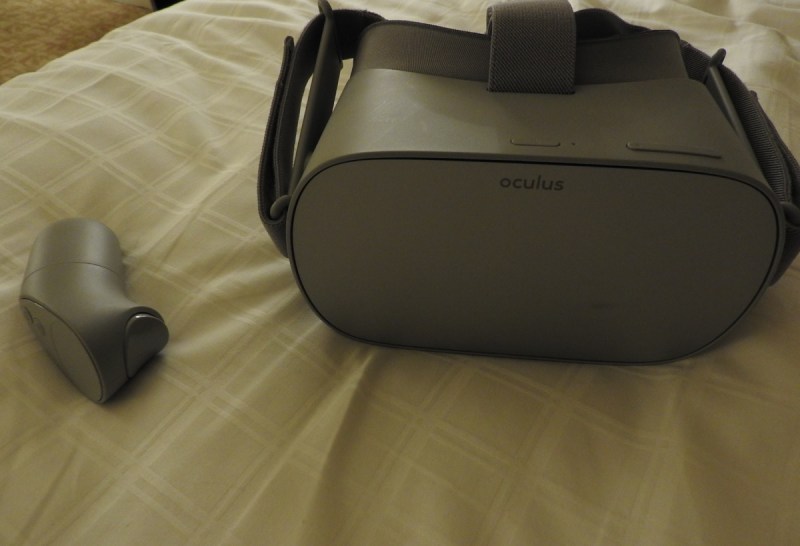 The cloth feel is quite comfy. You can put the Oculus Go over your eyeglasses. Most VR headsets mash my specs into my face. But the Go fits over my glasses just fine. The top strap is removable to accommodate different hairstyles. The device is lightweight (it weighs 1 pounds) and is simple to use. The audio comes through a slit in the straps, so you don’t need to use earphones. If you want to plug in your own headset, you can do so.

Easy to carry around

It’s liberating to go without wires or tethering to a PC. I took the Oculus Go with me on the road and used it in my hotel room. You can take it off and pass it to a friend without going through a big startup routine. The Go is also a better experience than mobile VR such as the Gear because you don’t have to fiddle with starting an app on your phone or worrying that you’ll drain your device’s battery.

It delivers a premium experience

The visual fidelity is good. The optics produce crisp images. And it didn’t make me sick, the way some poorly designed VR applications and headsets can do. The Go has a fast-switching liquid crystal display (LCD) that has a good pixel fill rate. The pixels are also bigger, so you notice less of a screen-door effect (as if you were looking at a world through a screen door) as you notice with other VR systems.

A wide variety of apps

More than 1,000 apps can run on the Go, and over 100 can make special use of its features. I enjoyed playing Coaster Combat, which lets you shoot targets while you’re moving down a roller coaster. It had the right balance of both immersion and an arcade-like feel to make me smile while I was playing.

Beyond that, you can use Oculus apps to do things like watch TV or movies. You can view Hulu or Netflix in VR, and enjoy quiet time without distractions. Oculus Gallery lets you vieww 360 media files from your camera or Facebook. And you can travel to new places or watch concerts with Oculus Venues.

You can carry this around to your friends’ houses quite easily. And you can join them in experiences such as virtual spaces such as Facebook Spaces, or watch a Netflix movie together even though you’re far apart.

I had a faulty unit for my first attempt. Oculus replaced it and the second unit worked fine. You install an app on your smartphone, and that walks you through an easy pairing process. Once that is done, you don’t have to do that again. For the controller, all you do is add a single AA battery. You tell it whether you want to use it in your left hand or your right hand. The Go updates itself via Wi-Fi, and it connects with your smartphone via Bluetooth. You can browse for apps in the store while in VR. 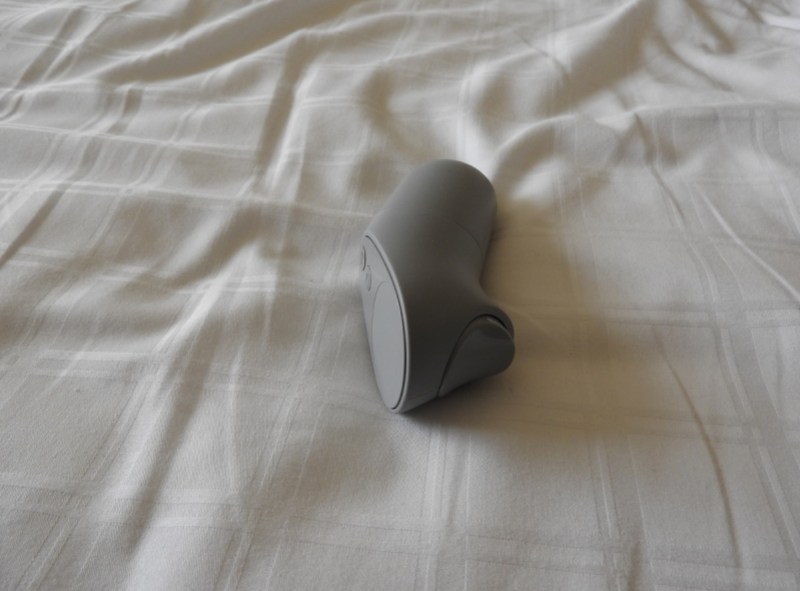 Above: The Oculus Go controller works, but it only lets you use one hand in VR.

The battery life is short

What do you expect? The battery lasts about up to 2.5 hours when using apps. When you’re playing a game, that time drops to about 90 minutes or two hours. You could play with the headset plugged into a USB charger, but that kind of defeats the whole mobility angle.

The controller is less immersive

Nothing can beat the Oculus Touch controllers for feeling like you have hands in VR. By contrast, the Go comes with a three-degrees-of-freedom controller that is pretty much the same as what you use with a Samsung Gear mobile VR headset (both are compatible). You only use it in one hand. It’s accurate enough, but it’s sort of like a point-and-shoot experience, rather than one that lets you pick things up in a world and play with them. The controller has a trigger, clickable touch pad, back button, and Oculus button, which is like a Home button.

The Oculus Go uses a Qualcomm Snapdragon 821 processor, which is powerful but can’t replicate the experience of a full PC. That leaves out some very good titles like Dead & Buried or Raw Data. But like I said, it’s a tradeoff. There are at least some cross-platform titles, like the Settlers of Catan board game.

Hopefully, this will get better over time. But some of the apps I loaded either stalled or loaded slowly. Downloading multiple apps can drain the battery, so it’s best to do that while the headset is plugged in.

The Oculus Go takes VR to a new generation for people who don’t want the hassles of either mobile or PC VR. It would be nice if we could get full, uncompromised VR performance and two hand controllers at the same time, but this is 2018 and the technology and cost isn’t there yet. In the meantime, it could expand the VR audience for people who don’t care about high-end performance. For the purposes of socializing or playing simple VR experiences, this is all the headset you’ll need.

It’s not completely operable offline, as many of the apps use a Wi-Fi connection. But offline play will be a regular feature of apps. Still, the capability to go anywhere and get into VR is a very liberating feature, and it’s perfect for those times when you are introducing someone to VR for the first time.

The Oculus Go costs $200 for the 32GB version and $250 for the 64GB version. It is available in 23 countries starting today, and it will be available online on Amazon, Best Buy, and New Egg. It will also be in Best Buy stores in the U.S.

Disclosure: Facebook provided me with an Oculus Go for the purposes of this review.