Oculus Quest is the new class leader for premium/standalone VR, and looks like the ultimate expression of the early-stage VR 1.0 market. Combining Oculus Go quality graphics with inside-out tracking and Touch controllers, it gives Facebook the most compelling version of the current state of the art.

But this is Oculus Quest’s challenge — it is the current state of the art. While it could sell well to an enthusiast market, it might not be the hoped-for mass market catalyst for VR when it launches next year. This could take another two years to arrive, with future generations of premium standalone VR headsets from Facebook, HTC, Microsoft and others around 2020/2021.

Digi-Capital’s VR market forecast anticipated Facebook’s recent announcements, with the impact and timing of premium standalone VR including Oculus Quest (when it was called Santa Cruz) factored into the numbers for some time. Based on hard data for device sales, attachment rates and attrition rates (i.e., how many units are no longer being used), VR’s total installed base (i.e., active units, not sales) across all platforms (console, PC, mobile, standalone) could take until the end of 2022 to top 50 million units worldwide. 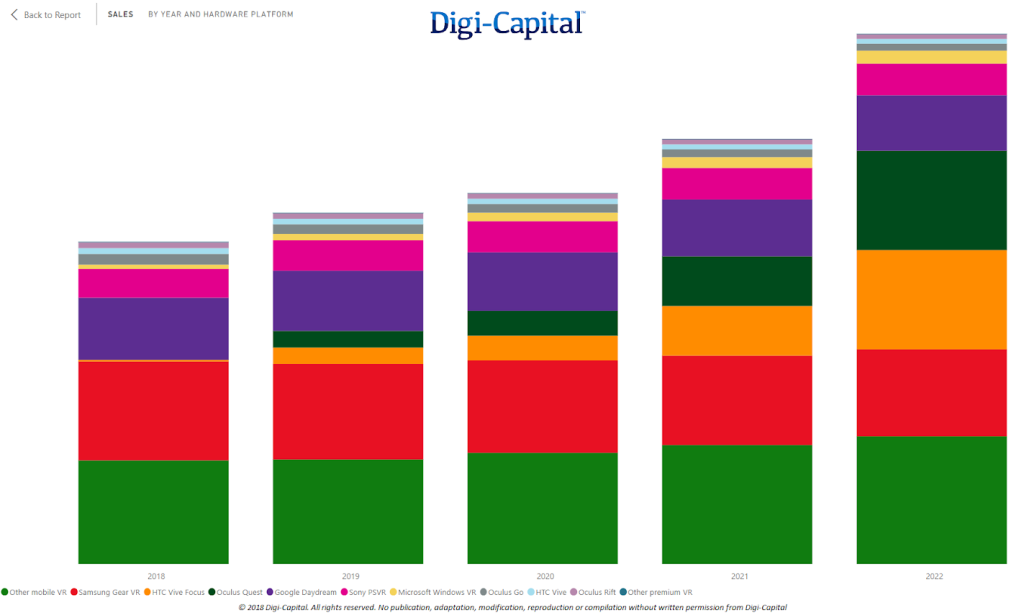 Premium VR in its current form was always going to have a deep but narrow installed base of core gamers, due to high cost and relatively poor user friendliness both in setup and use. Premium standalone VR addresses some setup and use issues (particularly freedom of movement), but is not a silver bullet for the market’s challenges. 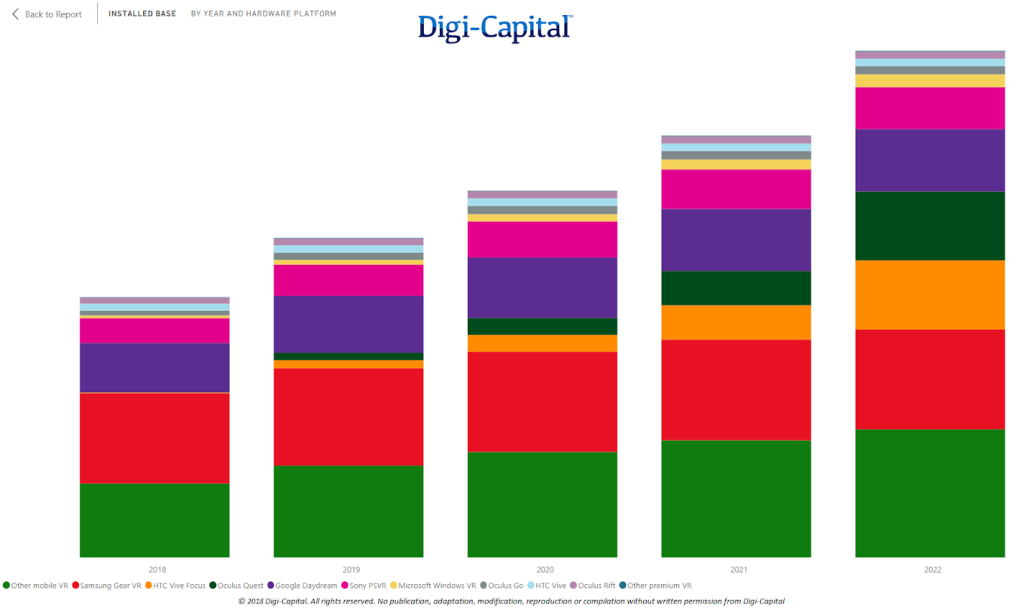 Above: VR installed base (units)

The $399 Oculus Quest is the third, and arguably best, entry into the premium standalone VR headset market after the $399 Lenovo Mirage Solo and $600 HTC Vive Focus. Like these headsets, it has both advantages and disadvantages relative to tethered VR cousins Oculus Rift, HTC Vive/Pro, Windows VR and Sony Playstation VR.

Oculus Quest does not require an expensive PC/GPU or external sensors to use. As a self-contained unit, it has no wires to restrict user movement. Inside-out tracking gives Oculus Quest a large play area, and it offers best-in-class image quality (apart from some higher-end competitors) and state-of-the-art controllers.

But this also means that Oculus Quest does not have an expensive PC/GPU running it, with processing power limited compared to tethered premium VR. Use time is constrained by battery life, although relatively short duration VR session times might make this a non-issue. The base model has 64GB of memory, which limits the amount of content the device can hold at one time.

These differences aside, Oculus Quest shares the same challenges as the rest of the VR industry.

VR’s user dynamics have been limited, partly because of a lack of plurality, but mainly due to user attrition. One of the challenges for VR is a primary entertainment focus (games, video), which despite its superior immersion can be done more easily and cheaply on existing devices. Also, the social side of VR hasn’t scaled — AltspaceVR was the biggest VR social app with just 35,000 monthly active users when Microsoft acquired it after Altspace said it would be closing. So while there are active core VR users, many casual users haven’t stuck with the platform for long.

Many VR headsets get used less than once a day, with a significant proportion every few days, weekly or even monthly. Our User Strategy team’s product/market fit reviews for startups have consistently shown this dynamic even when users love their VR apps. The words “evenings”, “weekends” and “holidays” come up frequently, particular for under-34 Snapchat demographic users. Not great for frequency.

VR is cool, technically hard to do, and can take you to other worlds. But VR’s entertainment focus effectively makes it a subset of the video game market (as well as other use cases), and critical use cases haven’t emerged three years into the market. For comparison, Uber launched three years after the iPhone. It’s hard to describe a VR app you couldn’t live without, even if you love Beat Saber.

And finally there’s the VC market for VR startups, which has slowed significantly. While Facebook and other platform companies will continue to invest in content, a relatively low installed based for VR has seen some early VR developers diversify to mobile AR or exit VR altogether. While there are emerging enterprise use cases, consumer VR faces the chicken-or-the-egg problem of all new platforms. VR platforms need a healthy commercial developer ecosystem to succeed, and VR developers need a large installed base to risk investing in development.

Oculus Quest could be the ultimate expression of VR 1.0, but it might take VR 2.0 for the market to reach its inflection point.