Oculus Rift should’ve launched with the Touch. It completes the VR system and gives it input parity with the competitions from HTC and Sony.

But Oculus VR, a subsidiary of Facebook, is showing up fashionably late to this party because its motion-tracked hand controllers have impressive capabilities that are missing from the Vive or PlayStation VR. Put simply: The Touch is the new standard for bringing your hands into virtual reality even if most games don’t take full advantage of the $200 device’s more impressive features.

The best VR hand-tracking yet

The Touch controllers are a pair of handheld grips that wrap around your hand and rest in your palm. Like your mitts, they are a mirror image of one another. On each unit, you’ll find a thumb stick, buttons, and triggers that Oculus has positioned under your digits. But beyond the buttons, the controllers also feature a touch sensor that can tell if your thumb is pulled in or sticking out. Finally, the Touch system comes with an extra camera for tracking your position.

All of that hardware comes together to give you the sensation that your hands are really in the VR world with you. Instead of having big, meaty paws — which is how it can often feel in Vive or PSVR — Touch simulates manual dexterity.

Some examples of what the Touch is capable of:

These various hand signals are also not simply “on” or “off.” If you gently squeeze the controller, your VR hand will begin to curl slowly.

What this does is multiply the ways you can interact with the various Oculus Rift games that support the Touch. It can take a couple of moments to adjust your brain around making a pointing gesture so that the controller will recognize it, but — once you do — body language becomes an option for communication and gameplay in VR.

You forget how important your hands are until you don’t have them in VR. Having the option to interact by grabbing or to motion toward someone else in an online game makes everything more natural. It’s far better than using a controller for most situations, and it opens up the possibilities for the kinds of games that are possible on Rift.

While it does take a minute to relearn your gestures, that’s not because Touch controllers are uncomfortable. They actually fit nicely in your grip.

Once you start getting lost in the action, your mind won’t be thinking about how you’re holding controllers. You’re just going to start doing the actions because the Touch devices melt into your hands. That’s important because that makes the haptic vibrating feedback that triggers when you grab something or hit something more startling and lifelike when you aren’t thinking about the physical thing you’re actually holding.

The controllers also last quite a while on a single charge. They both pack in a ton of sensors, button, and rumble motors, but they still easily keep up with play sessions that last for hours. And with certain Touch games, you may actually want to stay in VR for two-to-three hours at a time.

One of the best things about the Touch is that they functioning perfectly as motion controllers for VR releases on the Steam PC-gaming portal. This means you don’t need to buy a Vive to enjoy many of those games.

Steam VR recognizes the controllers basically as the Vive wands, but everything just works. If you can do it on Vive, it’s possible to do it with Touch. 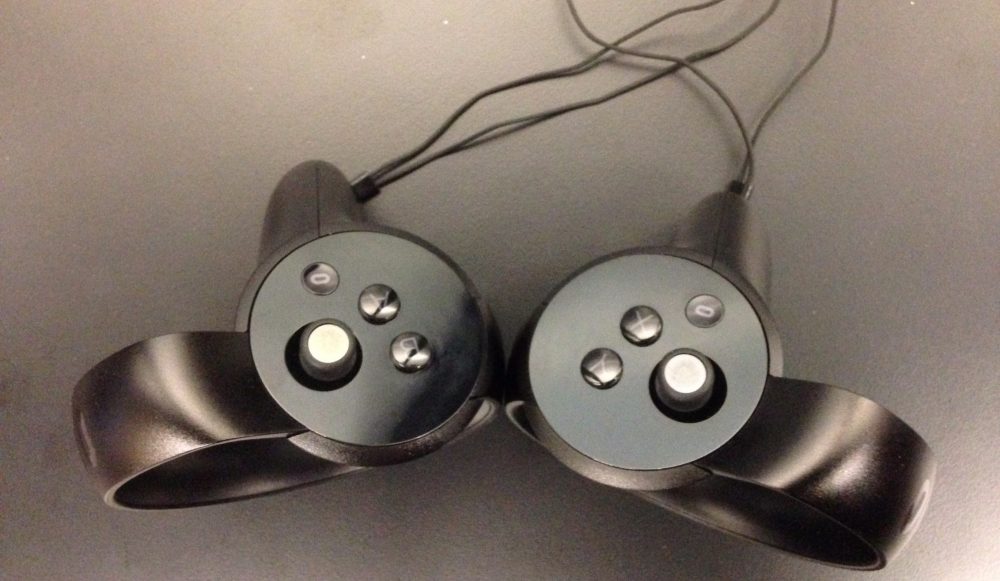 Above: The Oculus Touch.

More than 50 games support Oculus Touch at launch, but that’s not as impressive as it sounds.

Many of the games were already available and are just now getting a minimal patch to support Touch. In most of these cases, the games don’t take full advantage of everything Touch can do. For example, you can’t point with your finger in Rec Room — a multiplayer social game. It seems like developers want to maintain parity between the Vive and the Oculus Touch, and that means they’re building these cross-platform experiences for the lowest common denominator.

A few games, like VR Sports Challenge, give you the option to point and give a thumbs up, and those are standout launch games for the Touch. But they are also reminders of the shortcomings of most of the library.

The Touch is wonderful. It delivers on a promise that Oculus made as a company a long time ago. Having your hands in games is key to presence, and Oculus now does that better than anyone. The issue is the software.

As long as Oculus keeps delivering games that take full advantage of the device, then this is a must-have addition to your $600 Rift headset.

Oculus sent sample Touch units to GamesBeat for the purpose of this review. It is available tomorrow for $200.