Facebook’s Oculus VR division is expanding its efforts to do both mobile and PC virtual reality systems. And the company is searching for a new leader to replace Brendan Iribe, who is stepping down from the top position to run the PC VR division.

Iribe, the current CEO of Oculus VR, will now be head of the PC VR division at Oculus. Meanwhile, former Microsoft technologist Jon Thomason will move from head of software at Oculus to run the mobile VR group. Iribe said the company has decided to create new PC and mobile VR groups to be “more focused, strengthen development, and accelerate our roadmap.” The top job at Oculus, supervising both Iribe and Thomason, is still open. 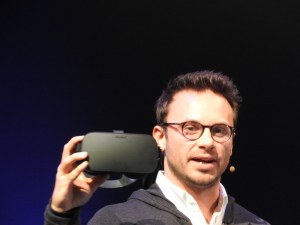 Above: Brendan Iribe with the final consumer version of the Oculus Rift virtual-reality headset.

To date, Oculus has led the charge in VR. Facebook bought Oculus for $2 billion in 2014. It launched the Oculus Rift VR headset in March, and earlier this month it debuted the Oculus Touch hand controllers for the Rift. And in late 2015, it also helped Samsung launched the Gear VR mobile headset.

“It’s been a remarkable few years for virtual reality and Oculus,” Iribe said in a post. “VR went from science fiction to the most exciting new consumer technology around. Oculus has gone from shipping early dev kits to introducing virtual reality to millions of people with Gear VR to launching the immersive power of Rift. Just last week, we put your hands into the experience with Touch.

“I couldn’t be more proud of what we’ve created—not just the products but the culture and team. We’ve brought together an extraordinary set of people with a shared passion for building the best virtual reality. And the exciting part is it’s still just the beginning. Facebook is committed to working on VR for the long term, which means building the next great computing platform that allows people to experience anything with anyone and connects the world in bold new ways.”

Iribe added, “Looking ahead and thinking about where I’m most passionate, I’ve decided to lead the PC VR group—pushing the state of VR forward with Rift, research and computer vision. As we’ve grown, I really missed the deep, day-to-day involvement in building a brand-new product on the leading edge of technology. You do your best work when you love what you’re working on. If that’s not the case, you need to make a change. With this new role, I can dive back into engineering and product development. That’s what gets me up every day, inspired to run to work.”

Iribe said that leaves an opening at the top for leading the entire Oculus team, PC and mobile groups included, and that he, Thomason, and Mike Schroepfer, chief technology officer of Facebook will find a new leader for the overall Oculus team.

“I’m thrilled to be on the front lines of creating the next leap forward in VR,” Iribe said. “We’ll continue investing deeply in research and development in computer vision, displays, optics, graphics, audio, input, and more to create the breakthroughs that will unlock new form factors and experiences. We’re going to move faster at solving the grand challenges of virtual reality. I’d like to thank everyone who’s come along on this fantastic journey. We’re going to push VR far beyond the boundary of what’s possible today, and I couldn’t be more excited to run to work every day and build the future of VR with all of you.”

Thomason joined Oculus in August as head of software. He previously worked at Amazon, Qualcomm, Everyone Counts, and Microsoft. At Microsoft, he worked on the Xbox 360, Xbox, and Xbox Live projects. John Carmack, the Oculus technology guru, will continue to work on mobile VR technology, and a spokesperson for Oculus said that the partnership with the Samsung Gear VR team is still in place.

Updated: Facebook is looking for a leader, not a CEO, for Oculus.