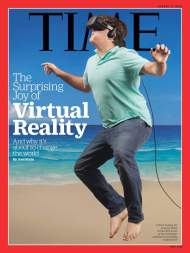 Palmer Luckey, who founded Oculus Rift and who many credit with reviving the virtual reality industry, has left Oculus VR and Facebook, as UploadVR reports. Facebook and Luckey are not sharing the details of the split, but it comes after months of silence from what the social network once positioned as the father of VR. Facebook stopped presenting Luckey at events or even mentioning him following revelations that he was financially supporting a group of political “shitposters” during the United States presidential election.

I’ve asked Luckey for a comment, and I’ll update this story if he provides any new information.

“Palmer will be dearly missed,” an Oculus spokesperson said in a statement to UploadVR. “Palmer’s legacy extends far beyond Oculus. His inventive spirit helped kickstart the modern VR revolution and helped build an industry. We’re thankful for everything he did for Oculus and VR, and we wish him all the best.”

Luckey started his career as a wunderkind. He is only 24 years old, and he has already started one of the hottest company’s in the VR space and sold it to Facebook for $2 billion. But Luckey made headlines during the U.S. election season for supporting a pro-Donald Trump political movement that allegedly involved white supremacists and disgraced former Breitbart editor Milo Yiannopolous.

Following the reports of Luckey’s political actions, he came out and apologized in September. But he has not made any public comments since then, and Facebook or Oculus have not mentioned him. Now, it seems likely that both parties were waiting until they could make a clean break from one another.