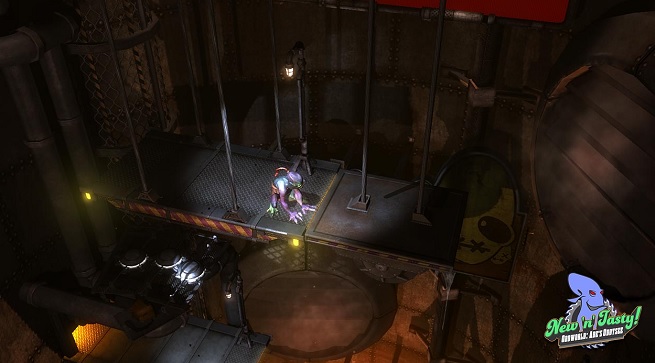 GamesBeat: Did you redo the voices in the game?

Lanning: Yeah, we redid it all. We spent a lot of time in the recording booth on this one. But here’s something we did that was fun. In polling the audience, we said, “Look, we can’t afford to do new IP now.” It’s not like we have hundreds of thousands of followers, but we have tens of thousands, and we can get tens of thousands of answers overnight if we run a poll. “What would you like us to build? We have these options as things we might be able to do. Which one do you want?” That’s where they came back and voted that this was what we should do.

It was a surprise, but I said, “Okay, that’s interesting. What would you like us to do after that?” Then they said, “Exoddus,” the same way. This trailer released this morning. Apparently it’s getting good buzz out there. I would like to do new stuff with Oddworld. But we have to have the success to make it happen. The short of it is, the audience will determine what our next content will be for the Oddworld brand. I like that position. It’s not like the marketing department is going to decide, because we don’t have one.

The brand visibility is serving us well. On digital, we’ve been able to reach just over two million units with the portfolio. That’s enabled us to put the product out there in slightly upgraded form, and then completely re-bake this one from the ground up. We’ve built a re-awakening of the brand out there. If that works and resonates well now, there’s nothing more I’d like to do than dive into some new, creative, innovative play patterns.

To me, Oddworld was never revolutionary, but it was evolutionary. It was basic platforming, but it was evolutionary in making you connect to your character more deeply. It had stronger production values, deeper character development, narratives that were more relevant, things like that. Then you got to later titles and the cost is going up. Munch was innovative in a different way. Gamespeak was innovative in a different way. But we were always trying to build more emotional engagement with characters.

In the beginning, with Abe, when we were first talking, I said, “Without talking to these guys, I don’t feel as emotionally connected. When it feels like they’re listening to me, I have a sense of investment. It’s how well they emote and express themselves, to where you can get younger people unplugging the PlayStation if their older brother is killing Mudokons.” We’d get letters like that. We were trying to make the characters more emotionally engaging, the way they are in other forms of content.

Munch was trying to do some things that were semi-successful. We learned a ton of lessons there. Stranger, we were innovative with the first- and third-person benefits, high-speed melee versus POV shooting, and the live ammo, where ammo is AI manipulators across the board. There’s different innovations there that are evolutionary, but not revolutionary. I’d like to be stepping into some more revolutionary content. 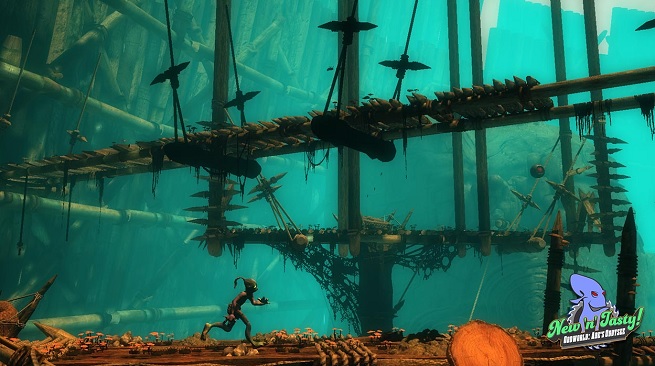 GamesBeat: Are your surprised that you can get to as many platforms as you can now? There have always been so many hurdles to that.

Lanning: In the past, the engine options were fairly narrow. Go back five or eight years. You had Unreal, and maybe some other semi-choices, but either way you were struggling unless you were building their shooting game. For us, multiplatform through our history was always a struggle. We’d start off with someone like Microsoft and be exclusive, and then we’d move on. We weren’t set up as far as infrastructure to think about advanced multiplatform, building out the core architecture so it could take advantage of different platforms at the code level. We didn’t do it very intelligently.

Now, running on Unity, it’s running on the Mac. I’m running it in a small window, but it’s basically the PS4 build on the Mac. We didn’t expect that to work, and it works. Even the lead programmer—I was over there in the U.K. last week and he says, “Is that a Mac?” He was really surprised it was running.

We’re still going through PS3 and Vita. We have the Xbox One dev systems. We’re talking a lot with other developers – “What are your pain points getting through the multiplatform process on Unity?” For some people, depending on how well they structure their own design and implementation, that affects how well they’re moving over to other platforms. But for us, so far, it’s been pretty smooth, surprisingly so. The crew has some experience in engineering. The key guys have been doing it for 20 years. They know how things should be structured, even if they’re compromised in some ways.

Steam is awesome. Their growth just keeps on happening. Steam Dev Days was interesting. I saw some interesting presentations on how they deal with different currencies now. They’re at, what, 75 million subscribers now? Pretty decent.

GamesBeat: Are you interested in getting on the Steam Machine?

Lanning: We’re looking at that. We have the Steam boxes. I think that’s really interesting. To me it’s like Steam’s Android, really. As long as you keep on making Windows 8, where the fuck is the future in that? Steam recognizes that. Microsoft wants to get everyone into their networks. Steam sees Microsoft forcing them out. It’s an interesting early countermeasure, doing the boxes.

There was a lot of excitement around that, particularly with Early Access. There’s two things, right? There’s early funding, like Kickstarter, and then there’s Early Access. We weren’t able to do that this time, but I wish we could. We’d get more hands on it, get more focus testing in. We have to predict a number of things, because we can’t afford throwing 100 people at it for focus testing.

Because we’re on PS4 first, we can’t have an early release. Being on the stage at E3 meant a 30-day exclusive on Sony platforms. I’m grateful to have that exposure. But as a result, we’re not able to pre-sell on Early Access. I think Sony needs to start doing that, and Microsoft too. It’s a brilliant plan, letting hardcore gamers get in there and give feedback and feel like part of the process. You’re monetizing it. 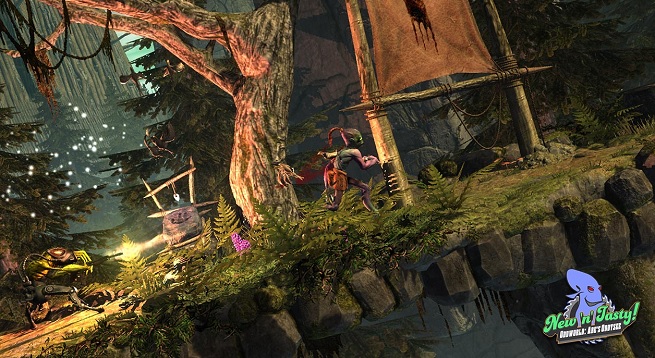 GamesBeat: How many people make up your company right now?

Lanning: At Oddworld there’s only maybe two or three employees, here in the states. Not including myself and Sherry. In the U.K. there’s about 17. Building the mobile product up in Vancouver, that’s a small team of about five. I’d rather have the relationships in small niche groups, people who want to specialize in different kinds of products, different spectrums.

These guys at Just Add Water in the U.K., they love the old story-driven platform games. That was their proposal to us, to form a relationship that would bring those back. We did some baby steps with some early products, but basically we’ve been funding that studio since about 2010. That started with about six people, so we helped it grow. They’re totally independent, though, and we want them to be that way. I don’t want to get in for the lockup phase or anything like that. We have a great working relationship, and we’ll keep it going.

That’s kind of a different world for developers, outside the traditional publisher deal. Which I’m thrilled to be in. It makes it more fun. We can make all our own decisions. We don’t have the deep pockets. We can only make so many mistakes before it really bites us in the ass. There’s no bailout. Like I said, on this one, there’s a couple of million of our own money in there, so it certainly stretches our kitty, our minimal reserves. But the audience is going to decide if they want us to keep building games.

There’s clarity in that. Like I said, it’s not the marketing department that’s going to decide. It’s not about whether we have airtime or not, or how many units we manufacture. I love the digital frontier. It allows us to have permanent shelf space once we’re out there. I can’t complain.