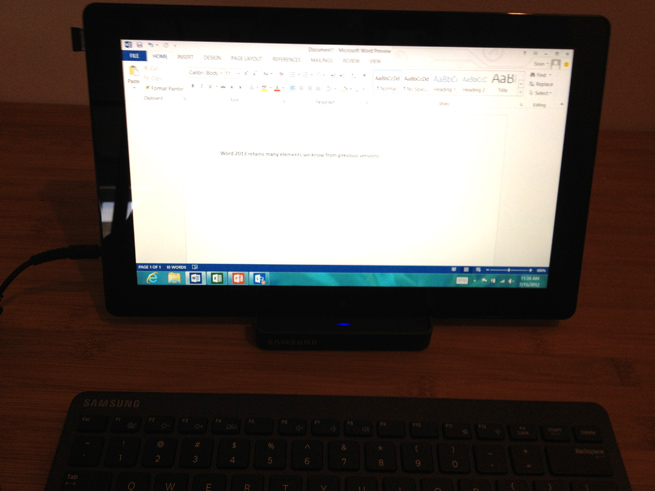 After numerous rumors and leaks, Microsoft has finally unveiled Office 2013, a versatile version of the well-known suite that tentatively embraces the future.

I was able to get my hands on the software running on a Samsung-made Windows 8 tablet a few days ago and have been tinkering with it since. In many ways, Office 2013 reminds me of Windows 8, Microsoft’s upcoming OS that stresses versatility and works decently well whether you use it on a desktop, laptop, or tablet. Microsoft, sensing that Windows 8 won’t be a big hit initially (or at all) with enterprise, has mostly decided to keep the 2013 apps as regular desktop apps instead making them Metro apps. That way, the apps will behave more like previous versions of Office and make for easier multitasking on desktops.

All of the programs you’ve known for years — Word, Excel, PowerPoint, Outlook, OneNote, Publisher, and more — have been redesigned with an eye toward a fresh and modern look. While Office 2013 retains many elements we know from previous versions of the software, it has also been given a touch-focused infusion so people using Windows 8 on tablets can use it. The familiar ribbon interface that was introduced in Office 2007 is still around but has larger text and a way to easily minimize the ribbon if you want it hidden. (That can save screen space on your tablet.) 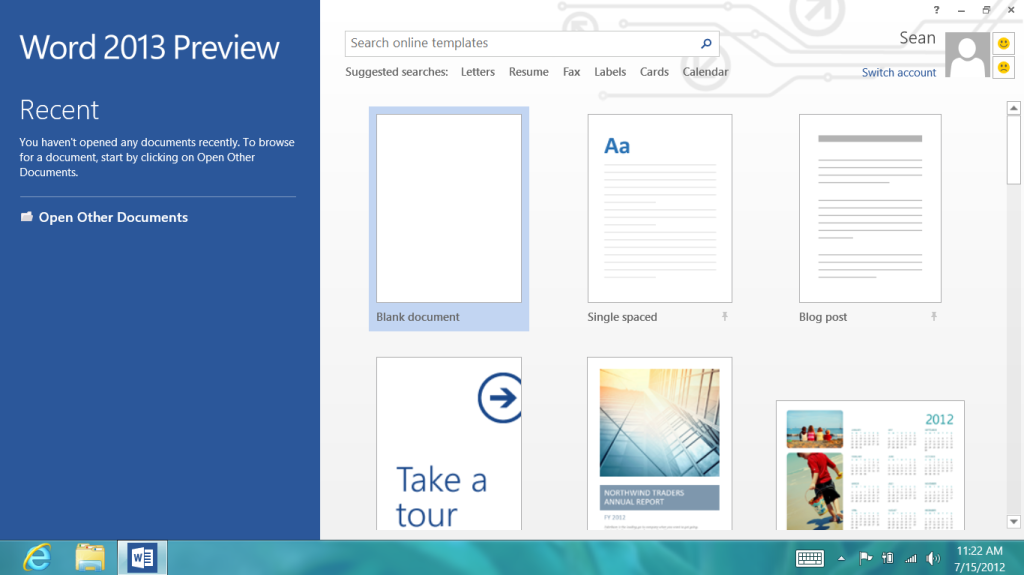 Many of the ways the apps have been tweaked make the life of the user easier. One big change is the inclusion of a helpful start screen (see above) that pops up when you start Word, Excel, PowerPoint, and more that shows popular template options to start a new document. Another is the constant connection to the cloud via Office 365 and Microsoft SkyDrive cloud storage. Ideally, whenever you are connected to the Web, Microsoft’s apps will be connected to your entire organization and a personal account that can be accessed no matter what device you’re using. Files are saved by default to your SkyDrive account for access anywhere, but you can save files locally, too.

After using many of the programs on a tablet, I can safely say that I’d much rather use these programs with a mouse and keyboard than relying on my hands. Using Word for typing a document was fine, but for almost any other program that needs constant formatting changes — Excel, PowerPoint, etc. — using touch can be tough and frustrating. Inputting a ton of numbers into Excel was especially agitating. The icons at the top of the screen that make up the “Quick Access Toolbar”, such as New, Open, Save, Undo, or Redo, are awfully small and difficult to tap with large fingers.

But using the software with a keyboard and mouse was a different story. With a mouse and keyboard setup either on a desktop or connected to a tablet (as you can see in the photo above), the software works quite well. Everything I did was responsive and snappy. The design is clean and the ribbon interface works just as a well as it does in Office 2010.

If I was managing a large enterprise that uses 2010, I’m not sure 2013 would be enough to convince me to upgrade. However, if your company is still using 2003 or 2007, Office 2013 could be a worthy step up that will help get your company ready for tablet and hybrid computing. The software will be especially relevant to companies considering adopting Windows 8 for tablets.

Office 2013 only works for Windows 7 or Windows 8, so if you’re still using XP or Vista, you’re out of luck. Microsoft has not yet disclosed pricing or expected availability for Office 2013, but if it reveals that information at its Office event today in San Francisco, we will update this post.

Check out the slides below to see more screens of Office 2013.