Apparently, people wanted to use Microsoft Word, PowerPoint, and Excel on the iPad. Now they can. But they shouldn’t expect life’s problems to disappear.

If you’ve shifted away from Microsoft’s heavyweight desktop word-processing, spreadsheet, and slide-deck programs and gravitated toward Google Apps, you should expect a bit of a time warp. 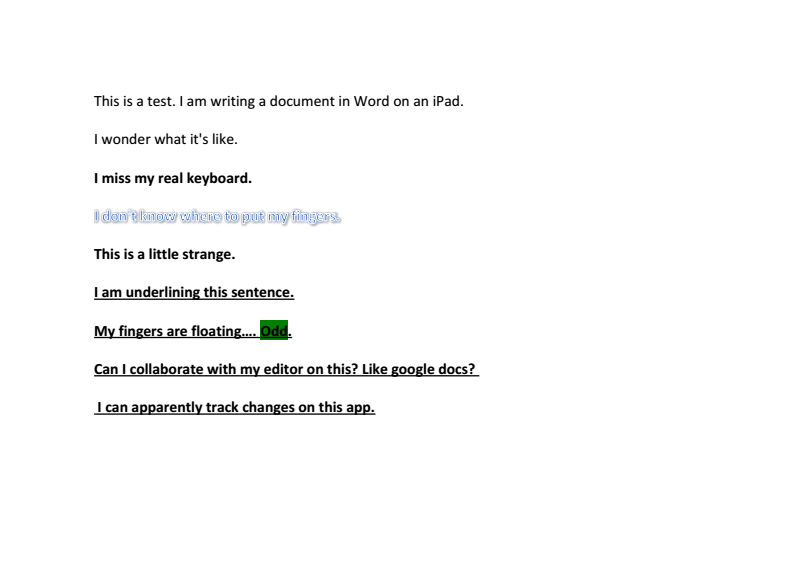 Above: A document I managed to make in Microsoft Word for iPad.

The Office user base is huge — 1 billion, Microsoft chief executive Satya Nadella claimed at a company event today — so today’s release should impact people, as business people do more on the go, and increasingly on their own devices. After getting my hands on an iPad Air with the new first-party Excel, PowerPoint, and Word apps at today’s event, though, I walked away less than impressed. While Microsoft has built these apps from the ground up, they’re not as intuitive as one might hope.

It might be the iPad’s fault that typing out a few sentences in a Word document feels a bit like assuming the role of some character in a video game — not the real thing. Perhaps, with all of Microsoft’s money, the technology giant could develop some way to make the typing experience on the virtual keyboard feel more like typing — quickly — on an actual keyboard.

Sure, you can underline, highlight, and italicize your work to bliss. You can track changes, if you dare. With a few seconds of lag, you can see a colleague’s revisions show up on your iPad screen. And you can peck your way to the visual depiction of a thought. But you can’t churn out your thoughts as fast as they occur to you, and this makes it flawed. Then again, I didn’t use the dictation feature, which might have accelerated input.

The new PowerPoint app for iPad had just too many things to tap, double-tap, and drag. After tinkering with a blank slate — without a template — for a few minutes, I had little to show. Basic fill-in-the-blank text fields could make the app more snappy.

With Excel, I jumped in to a spreadsheet prepopulated with some numbers and a chart. I can’t imagine bouncing back and forth with numbers on the clipboard to paste in to a new sheet. I slowly created a few formulas to perform basic math, and I managed to expand the width of a couple of columns, but altogether, I felt incapable of achieving much. I found myself sending a link to the spreadsheet in order to edit it on a desktop.

And unlike, say, Google Sheets, multiple people can’t collaborate on a file in the Excel app on the iPad. Not yet, anyway.

Finally, I couldn’t export these files to non-Microsoft cloud-based file-sharing applications, from companies like Box, Dropbox, or Google Drive. Naturally — because they compete with Microsoft. But interoperability is important, and Microsoft would be wise to think up ways to let people share wherever they want to share.

So yes, Microsofties can run these apps on the iPad now. The important thing to ask is whether they would want to, day after day.