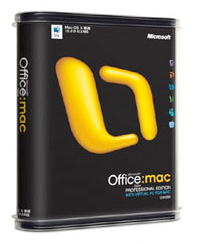 I recently received a Microsoft Word file from a company that distributes monthly reports. I duly posted screenshots of some of their charts. Whoa, the company’s PR contact emailed, those are the wrong captions. For some reason, she saw newer captions on her Mac, but I saw her old ones on my PC.

That will happen a lot less often, Microsoft says, with the upcoming Office for Mac 2001. Microsoft’s Macintosh Business Unit issued an announcement on Thursday timed to the first really crazy day of Macworld Expo here in San Francisco.

“The suite has new connections to Microsoft services,” a prepared Microsoft statement says, “so you can work together more effectively, an updated user interface making tasks easier, and essential compatibility to ensure your documents look the way you made them when shared.”

But the best  news is Office 2011 will dump the little-used Entourage email client in favor of a Mac version of Outlook. Finally! “The communications app will be built in Cocoa for the latest Snow Leopard integrations and appearance,” PC Magazine reports, adding that Outlook for Mac will work with the same .PST file format used by the Windows version to store messages and other items.

If you don’t hate Microsoft with all the bile in your heart, this is great news. Especially if you’re a freelance writer like me who schedules meetings and trades mail with nearly a hundred Outlook-using PR people and entrepreneurs all day, every day.

The press release dubs Office for Mac 2011 “the quintessential teammate.” I’m snobby enough to guess that whoever wrote that doesn’t know the etymology of the word “quintessential,” which comes from the age of alchemy. Is Microsoft Office the mythological perfect fifth element? I don’t think that’s what they meant.

The essential teammate would be more accurate. Despite Google Docs, Zoho and many other Microsoft competitors, nothing makes my editors at national print publications happier than when I fire up Word to write an article for them. Word, Excel and PowerPoint are the most widely understood and supported file formats among many knowledge workers. And Office calendar events for meetings are how most of my business contacts schedule and manage meetings at their own offices.

Gmail handles Outlook events automatically, sticking them into my Google calendar, but I’d be much happier running my email and calendar in a combined desktop app on my 24-inch iMac, rather than wrangling them inside Google Chrome browser tabs. Desktop apps run faster, there are no little waits for the network when saving changes, and I can keep my email and scheduling separate from all the browser windows and tabs I pop open while researching and writing assignments.

To recap, Office for Mac 2011 has three other enhancements over the current 2008 edition.

I’ve asked Microsoft for a review copy. I’m going to stick my neck out and try filing a few articles for The New York Times, The Wall Street Journal, and Wired magazine using Office for Mac 2011. I’m going to try running my day in Outlook instead of Google Docs. If my editors don’t reply with a snippy “couldn’t open this,” if my BlackBerry’s Documents to Go client can pop open my Office 2011 essays and spreadsheets, and if Outlook for Mac is as good as the PC version, I’ll finally be happy to see the Ribbon on my iMac.