OffiSync, a self-funded startup run by entrepreneur Oudi Antebi, has created an Office add-on that integrates Google Docs, Google Apps and Google search into Microsoft office. When you open up Microsoft Word, for instance, you can see the Google functions on the menu, as if they were a Google toolbar. The software will be available as a beta download today.

Microsoft is slowly moving in this direction. It has promised to integrate software and services into the Office suite by 2010 to give the desktop software more features that make it seem like a cloud-based solution. When Antebi heard that was the plan a year ago, he decided to hire a bunch of contractors and do it himself. 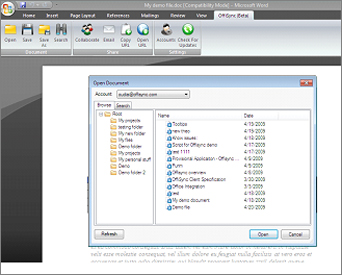 “We are Googleizing Microsoft Office,” he said in an interview.

OffiSync works with Microsoft Office 2003 or Office 2007, and it will be available for the Mac in the future. It supports Word, Excel or PowerPoint documents. One of the best features is desktop-web synchronization. You can save a document to the desktop using Office, or you can tap Google Docs to make that document available on the web.

Antebi showed me a demo of the software, and I could clearly see that the Office document he was working on could be saved as a Google Doc on the web, stored somewhere in Google’s cloud where a user could access it from any web-based computer. You can work on either document at high speed, since Antebi’s software caches a version of it in local memory.

You can also use Google search from the Office toolbar to find any of your Google Docs documents in a matter of seconds, and you can collaborate with someone else at the same time, as is possible with Google Docs but not with the desktop version of Office. When Microsoft launches Office 2010, customers will need to get that version to use Office on the web.

After the initial release, Antebi said OffiSync will add more features for real-time collaboration, better search integration, and additional Google services (perhaps Google Maps). Google Docs debuted in 2006, but it’s surprising that Google itself hasn’t done this integration yet. Others have tried to do this. DocSyncer tried, but it shut its doors last year.

OffiSync will be free for individuals, but a paid enterprise version will debut later to let large businesses work in a mixed Google Docs/Office environment. Antebi said thousands of people have already signed up for the beta. Here’s a video of it.