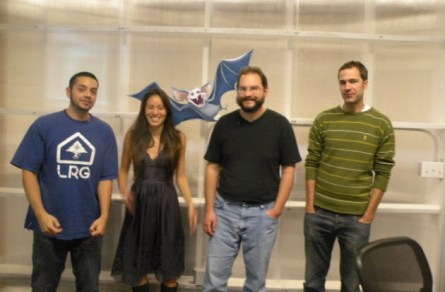 Game startup Ohai is launching a new vampire-themed online world on Facebook as part of an attempt to snare more time and money from social network fans.

Social games have exploded on Facebook this year. But the games have been casual, holding the interest of users for just minutes a day. Ohai wants to take social games to the next generation by launching a massively multiplayer online (MMO) game that will have synchronous play, meaning live games with constant movement and action.

Susan Wu, co-founder and chief executive of San Francisco-based Ohai, said in an interview that she hopes that by launching City of Eternals on its own web site and on Facebook, the company will attract players who would never otherwise play an MMO. She also said that Ohai intends to make its games addictive enough to generate a lot more revenue each month than typical social games, which generate sales of a few dollars a month.

It’s an interesting gamble, since Facebook games are dominated by Zynga and Playfish, whose games have tens of millions of players. But it only makes sense that there should be more to Facebook games than farming carrots (Zynga’s hit FarmVille title) or running restaurants (Playfish’s Restaurant City).

“There is a huge market left untapped for MMOs that can be played by everyone,” Wu said in an interview. “It’s the next leap in social gaming. To date, MMOs have been pretty inaccessible.” 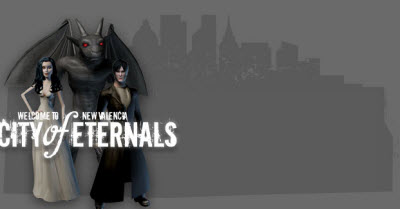 Ohai’s game is accessible in part because it runs on Flash and doesn’t have complex 3-D graphics like many hardcore MMOs that require expensive computers. The two-dimensional vampire game is synchronous, meaning players can move about simultaneously in a live world rather than take one turn at a time.

It runs at a fast speed in a small browser window on a Facebook page. That’s no small achievement, since the game has to handle as much as 5,000 web-based transactions per 100 players.

The game is set in New Valencia, a modern-day vampire city in the Pacific Northwest and it has a complex story with more than 20 different missions. Users can create their own vampire characters, customizing the look and clothing to their own tastes. The players can fight supernatural creatures in combat zones and level up, earning goods along the way. You start the game with an apartment that you can decorate. You can grow things to buy or sell, adopt a trade, and join one of four vampire houses, or clans. You can enlist your friends as minions in a vampire army. A lot of these features are standard in social role-playing games. But there’s a lot more room to explore in City of Eternals, which has a sizable map with a growing list of locations to visit.

The game is free to play. But if they want a better experiences, players can pay for virtual goods for anywhere from 2 cents to $20. Users can earn or purchase Ohai coins, which can be used to make the goods purchases.

The game is social because of the integration with Facebook. It is integrated with Facebook Connect and Twitter. In the middle of the game, you can use a mouse to hover over a vampire character, and it will show the user’s Facebook name and picture. You can then send them a Facebook friend request. Normally, in MMOs, there’s no easy way to find out the identity of another player, except through direct communication. You can do that via text chat in City of Eternals as well, but there is no voice chat at the moment.

Ohai has a real opportunity here for a few reasons. Vampire games were once the most popular app on Facebook. One of them was created by Blake Commagere, who joined Ohai as a co-founder but has since left. Now, vampire games are nowhere to be found on Facebook’s top 15 leading apps, according to AppData. So Ohai’s game has a chance to pull in desperate vampire fans. Its timing is also good given the popularity of vampire shows like True Blood, Underworld, and Twilight, Wu said. In that sense, City of Eternals can tap into the growing popular interest in the romance, action and dark humor of vampires.

There are also no popular synchronous MMO games on Facebook. Asynchronous role-playing mafia games, where players take turns one at a time, are popular. It may very well be that social gamers don’t really want to play synchronous games, which in some ways are more demanding of the user’s attention.

But that’s a test for Ohai. Synchronous MMOs aimed at hardcore gamers are wildly popular on stand-alone web sites. World of Warcraft has 12 million paying subscribers for its fantasy role-playing game, but there is no equivalent of it on Facebook, largely because typical PC-based MMOs are built by teams with scores of people working for years. Gaming on Facebook is just a couple of years old.

Wu, whose resume includes being a professional Quake 2 gamer and former partner at Charles River Ventures, started the company in the fall of 2008 and recruited a top team of game veterans. As co-founders she enlisted Commagere, Scott Hartsman of Sony Online, and Don Neufeld of Sony Online Entertainment. Both Commagere and Hartsman have left. Wu said that was a “natural evolution” of a startup.

With just three engineers on a team of 12, the company managed to build its first MMO in just nine months. Neufeld, who has worked on 15 MMOs in his career, said the team built a game platform that can be deployed quickly. Ohai plans to go into production on its second game next month and take much less time to finish the game. The plan is to create games that operate as efficiently as web services.

Ohai built the game in Adobe Flash 3D and created bite-sized entertainment that players can play in short bursts of time. There are 10,000 alpha users now who play an average of 65 minutes a day and log in as many as 10 times daily. So the average game sessions are short, in contrast to most hardcore MMOs like EverQuest. Players can enter the game at a variety of points, depending on what they want to do. They don’t have to waste time traveling from one part of the game world to another.

Ohai raised $6 million in January from August Capital and Rustic Canyon Ventures. Wu believes that Facebook games last a short time and don’t generate much more than a couple of bucks a month per user, whereas quality MMOs like World of Warcraft can generate a lot more money.

“Our goal is to take over the MMO universe,” Wu said.