Rebecca Black became a cultural icon in a not-so-good way because of her saccharine music video “Friday,” which took off on the internet. Now, the YouTube video that made her famous and amassed 167 million views has been taken down. Oh, God. I miss it already.

The video by the 13-year-old girl became an instant hit because people enjoyed making fun of it. The sensation catapulted Black to an appearance on Jay Leno’s Tonight Show.

The message on the video link says, “This video is no longer available due to a copyright claim by Rebecca Black.” Earlier this week, the video had been set up as a $2.99 YouTube video rental by ARK Music Factory, which runs the YouTube account. It’s not clear what is happening, but it could be a dispute over who gets the revenues from the video. 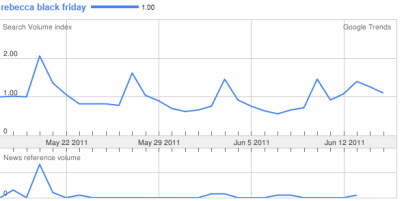 A YouTube spokesperson told Techcrunch, “YouTube takes copyright infringement very seriously. When we receive a complaint alleging that a video infringes another person or company’s copyrights, we remove that video. Users who believe that a video was removed in error can appeal the copyright takedown.”

You can see from the Google Trends chart below that “Rebecca Black Friday” as a search term saw a spike back in May but has since died down considerably. It was a good run, though. Black’s Friday video got more views than Lady Gaga’s Born This Way video, which has been viewed more than 60 million times.