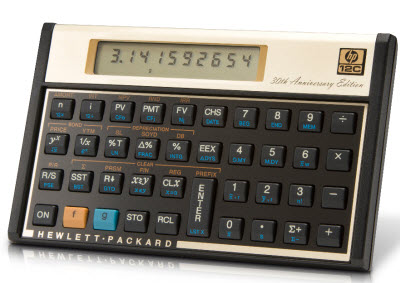 For math geeks, it doesn’t get better than this.

Hewlett-Packard is marking the 30th anniversary of its HP 12c Financial Calculator today by launching a limited-edition version aimed at nostalgic fans.

While the company hasn’t won praise for its business strategy lately, the HP 12c calculator has been one of its best-selling products ever, and it has been in continuous production for the last three decades. It shows that high-quality products can keep selling for a very long time, even if it seems like time has passed them by. Yes, geeks can be very loyal.

“It lasted this long because of the quality of it,” said Dennis Harms, the original project manager on the 12c, now working in HP’s printer division, in an interview. “We had no idea it would last this long. We thought it would have a two-year life.”

As a result of the longevity, multiple generations of people have grown up with fond memories of the 12c. In some ways, the 12c had great timing. It came out at a time when it could address most of the functions that financial experts needed, like calculating interest rates for real estate agents. And it could calculate those functions instantly. You didn’t have to wait for it to boot up. So it came with a complete feature set and it didn’t need to be replaced every year with models that were on the “faster, better, cheaper” track. That’s pretty rare for tech gadgets, which normally always benefit when they move from last year’s model to next year’s model.

HP calls this machine the “gold standard of business calculation,” and the Museum of HP Calculators calls it the “calculator that wouldn’t die.” Though it has been followed by many other models since its introduction in 1981 for $150, the device is HP’s best-selling and longest-selling calculator. It came out the same year of the launch of the space shuttle Columbia and the same year as the IBM personal computer. 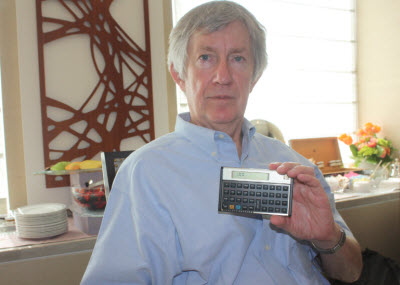 The HP 12c has a landscape layout, computations that are more accurate than federal standards publications, and a keypad that lets users enter complex formulas. It has replaceable batteries and fits in a shirt pocket. The calculator is one of only two calculators permitted for use during financial professional certification exams.

“It’s too bad we can’t calculate how many deals were decided, trades transacted and loans granted with the assistance of the 12c,” said Phil McKinney, vice president and chief technology officer at the personal systems group at HP.

Harms (pictured) said that the previous calculator model suffered from quality problems. The keypads stuck and HP never shipped it. So Bill Hewlett and Dave Packard, the founders of HP, told the engineers to ship it only when it was perfect because the company’s reputation was riding on the 12c. At that time, calculators were a big part of HP’s business, which consisted mostly of selling test and measurement equipment.

“Management told us, ‘Don’t screw this up,'” Harms said.

HP built  chip factory to manufacture the two major chips for the 12c. The factory used the complimentary metal oxide semiconductor (CMOS) manufacturing process, which now dominates the industry. One chip was nicknamed R2D2, after the Star Wars droid, as an abbreviation for RAM ROM Display Drive. And it had a microprocessor built with 6-micron circuitry. Now, chips can be fabricated with 32-nanometer circuits, many times smaller. (If I had a calculator handy, I would figure out how many times smaller that is). HP also used just-in-time inventory for the calculator.

That meant that it gathered its suppliers close to the factory and fed parts into the manufacturing as they were needed. The result was that HP could build 750,000 to 1 million units for the launch of the device. Retailers such as student book stores typically ordered much more than they needed because they were never sure HP would ship them enough supplies. So they ordered a lot of the new calculators — and the devices sold out. HP hasn’t quite figured out how many it has sold to date. 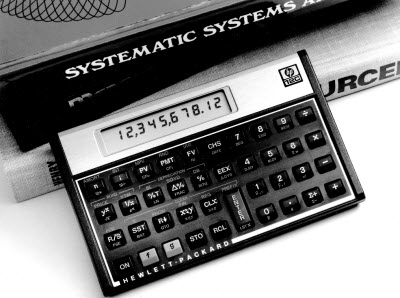 The new model will sell for $79.99. The calculator features Reverse Polish Notation, which improves efficiency and thereby speeds the calculation of loan payments and interest rates, time value of money, standard deviation, percent, cash flows, and other equations.

The limited edition calculator has a unique production number laser-etched on the back and is sold in an elegant gift box. HP is also reintroducing its HP 15c Scientific Calculator, first launched in 1982. That calculator was discontinued in 1989 and it lived on as a mobile app. The 15c has the same design, but the new one has 100 times faster processing speed. The 15c will sell for $99.99.

More info is available here on the history of the 12c and 15c. The 12c does have one flaw, Harms said. It has to do with date-related calculations, where it tells you what day of the month and year it will be when you ask it to calculate the date 200 days from now. You can only calculate until Nov. 16 in the year 4096. After that, you get an “out of range” error message.