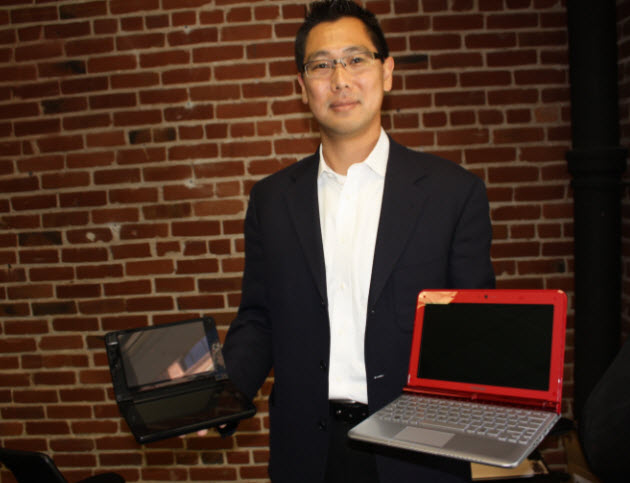 Twenty-five years ago, Toshiba shipped its first laptop computers. And the Japanese company is still unveiling some radical new designs in personal computing. Today, the company is unveiling its Libretto W100 ultra-mobile laptop with dual touchscreens and no physical keyboard.

Pictured at the top left, the Libretto opens like a clam shell and has two touchscreens that can respond to multiple finger touches at the same time. It’s a concept design that for now will be made in limited quantities; the company’s main goal is to get feedback on the design so it can offer a mass production version later. This design is one of many new computers that Toshiba is launching for the back-to-school selling season, said Toshiba’s Phil Osako (pictured above).

It offers a full Windows 7 operating system, allowing it to run Microsoft Office and Skype video chat. It has built-in Bluetooth 5 and 802.11n wireless networking. The Libretto weighs 1.8 pounds and uses a virtual keyboard on one of its two 7-inch screens. When you type, you can feel that you hit a key because the Libretto has force feedback.

You can surf the web on one screen while checking email on the other. The Libretto also has an accelerometer so that you can view the screens in landscape or portrait modes. It measures 4.84 inches by 7.95 inches and can fit into a bag or jacket pocket. Toshiba also includes a bunch of its own apps aimed at giving users quick access to features. The geek details: the screens have 1024 x 600 resolution, Intel Pentium U5400 processors running at 1.2 gigahertz, 2 gigabytes of DDR3 main memory, and a 62-gigabyte hard disk drive. There’s also a 1-megapixel high-definition webcam.

Toshiba is also launching its 25th anniversary edition Portégé R700 ultra-portable laptop. It has a 13.3-inch screen with a full keyboard and a DVD drive, with prices starting under $1,000. Aimed at business users, it weighs 3.2 pounds and is an inch thick. It uses a new Airflow Cooling Technology that directs fresh air over the hottest components in the system.

It has a magnesium alloy case reinforced with a honeycomb rib design to make it stronger. The device uses Intel Core microprocessors. Battery life lasts up to 8.5 hours on a six-cell battery. It has a separate $199 accessory that replicates ports so you can plug lots of gadgets into it. With an Intel Core i3 processor and a 500-gigabyte hard drive, it sells for $999. Other models are more expensive.

A consumer version of the laptop, with blue color, will sell for $889. The Portégé R705 will be sold only at Best Buy. It has an Intel Core i3 processor, 4 gigabytes of DDR3 memory, and a 500-gigabyte hard drive. It also uses the Intel Wireless Display, which connects a laptop to a big-screen TV via an HDMI attachment for the TV. The R700 is available today via Toshiba’s resellers and its direct site, and the R705 is available in Best Buy stores in June 27.

Toshiba’s first laptop was the T1100 launched in 1985. Last week, Toshiba also refreshed its full line-up of consumer laptops. Its Satellite C series laptops will sell for $449 to $559. Toshiba also launched a new series of netbooks, which are smaller and cheaper than laptops, for as little as $299. It also revamped its most expensive entertainment laptops.

So the company has pretty much redone its entire line-up for the back-to-school season. Many of the changes are timed to the release of new laptop chips from both Intel and AMD. That’s the kind of aggressive redesign that is necessary to remain relevant to consumers during the recession. By contrast, Apple hasn’t changed much of its line-up lately.