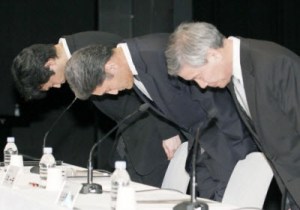 A slumping TV business and a surging yen combined to send Sony into the red. The company reported a net loss of $2.09 billion for the final quarter of 2011, a far cry from the nearly billion in profit it managed to end 2010 with.

This makes nine straight years of losses for Sony’s TV business. Sensibly, new CEO Kazuo Hirai’s first moves have been to scale back the television division and look to replicate some of the success he had with video games at Sony. As VentureBeat’s Dean Takahashi wrote yesterday, Hirai was largely responsible for the success of Playstation in North America. He was also the one who took the stage to bow and apologize when the Playstation network was hacked last year.

The company also projected an annual loss of $2.9 billion for the fiscal year ending in March 2012.

Some of Sony’s losses this year came from moves it made to streamline the business. It sold its stake in a joint venture with Samsung to produce flat panel screens and bought out Ericsson to consolidate its smartphone business. The earthquake and tsunami that struck Japan last March shut down 10 Sony plants and interrupted supply chains.

But the new CEO made it clear that Sony had no excuses, and would try to find a way to regain its footing in the consumer electronics market. “I hold a very severe sense of crisis,” Mr. Hirai told reporters at a conference on Thursday, 24 hours after he replaced former CEO Howard Stringer, who will become chairman. “Without a faster sense of speed, Sony cannot win.”