It took me a while to find 40,000 people to follow on micro-messaging service Twitter, and even longer to build a base of 100,000 devoted followers. But now, with my counts reduced to 98 and 95, respectively, it feels like all that hard work has been scraped from the face of the Earth. To top it off, some people I follow are tweeting things they claim not to have tweeted; while none of it has been violent or pornographic, I’m feeling small. Even scared. 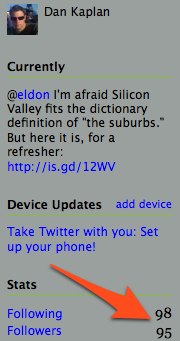 No, it’s not the famous Fail Whale or the loss of a vital function, like replies. It’s chaos, out and out, and it’s been going on for almost 24 hours.

Some time yesterday afternoon, Twitter’s systems wreaked havoc on many people’s follower/following counts, and the company has neglected to explain why. A few observers blamed Twitter’s recently beefed-up anti-spam bot for doing the damage, but Twitter has denied this is the case. All we’ve heard from the company, however, in its most recent update, is that “we’re still putting follower/following relationships back into place,” and that “there will be inconsistencies over the next several hours.”

Meanwhile, some, like the blogger Louis Gray, have had tweets they didn’t write go out in their name. While this doesn’t seem to be a widespread problem, it is certainly not okay, even if it is funny. In an ironic twist, Louis Gray’s ghost tweet, actually from a user named Tocaya, said the “Internet needs to be faster and more consistent. Web apps are not yet 100% trustworthy.”