60 percent of social shopping starts on Facebook. 15 percent starts on Pinterest, and a little five percent wedge begins on Twitter. But there’s one network you’ve probably never heard of that drives more than Pinterest and four times more social shopping traffic than Twitter.

Polyvore is essentially a Pinterest that is explicitly focused on products you might want to buy. And with a slogan like “Discover, shop, and express your style,” it’s not surprising that even with vastly less social reach than Facebook, Twitter, Pinterest, or many other social networks, it drives disproportionate amounts of social revenue.

“Facebook’s audience is huge, so it’s not surprising that they drive a mass audience, with somewhat lower average spend, on retailer sites,” Diane Kegley, RichRelevance’s Chief Marketing Officer said in a statement. “Pinterest and Polyvore attract a different shopper — in large part because of the user experience: those sites are very visual and engaging — and in many ways mimic a curated catalog experience with ensemble shopping.”

Interestingly, however, Facebook has the highest social shopping conversion rate among the major networks. 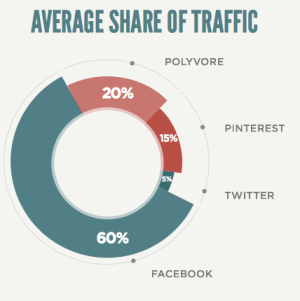 Even more impressive, however, is Polyvore’s average order value.

While the AOV for Twitter is just under $60, and Facebook is just over $90, the average order value for a Pinterest shopping session is almost $200. Even that, however, pales before Polyvore, which drives average shopping carts with an astounding $383 value.

That’s likely due to the fact that Polyvore focuses on fashion — and fashion can be pricey.

While who gets what share of social commerce is interesting, there is some bad news before the coming Christmas shopping season: Social channels still have major issues in driving significant amounts of paying customers to online retailers.

That’s probably a little harsh, as other data has found social commerce to be bigger than one percent — although not much. Part of the problem may very well be attribution, as an Adobe digital ad study based on 130 billion Facebook likes and over a billion Facebook posts showed that social was under-reported in its influence on buying behavior.

“Social media is often not the last thing you do before you buy … it’s often the first thing,” Adobe’s digital ad analyst Tamara Gaffney told me recently. “So advertisers are undervaluing social … especially Tumblr.”

In the study of 700 million shopping sessions, Facebook generated $10.7 million in sales, while the vastly smaller Polyvore generated almost 60 percent as much: $6.34 million. Pinterest generated $2.1 million, while Twitter was responsible for just $93,000 in sales.

“Brands and retailers tend to focus on the big three social networks – Twitter, Facebook, and Pinterest, but we can’t overlook a site like Polyvore, [which] is driving double the average order value of Facebook,” said Kegley. “The consumers on Polyvore are in buying mode, and there is real value to retailers and brands when social consumers are in that mindset.”