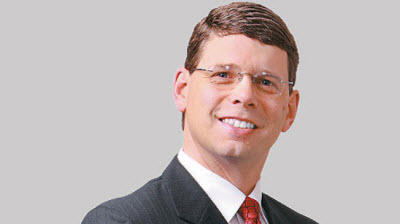 In its first full quarter under a new CEO, Advanced Micro Devices reported solid fourth quarter operating income, but a one-time charge threw it into a loss.

AMD reported a loss of $177 million, or 24 cents a share, compared with 14 cents a year ago. Revenue was $1.69 billion, compared with $1.65 billion a year ago.
Rory Read (pictured), left the No. 2 job at AMD customer Lenovo to take the position as chief executive of AMD at the end of August.

Analysts expected the company to report a profit of 16 cents a share on revenues of $1.72 billion. The results included a $209 million non-cash impairment charge for the change in value of Globalfoundries, the manufacturing company that AMD spun out as a separate company.

On a non-GAAP basis, not counting the charge, AMD reported fourth quarter net income of $138 million, or 19 cents a share, and non-GAAP operating income of $172 million. Besides the one-time impairment charge, AMD  reported restructuring charges of $98 million related to cutbacks in the fourth quarter. Revenue was short due to graphics chip salesthat were weaker than expected.

In a statement, Read said he was encouraged by the success of AMD’s line of Fusion processors, which combine a microprocessor and graphics on the same chip. To date, AMD has sold 30 million accelerated processor units (APUs), or combo chips. Read said AMD’s Brazos low-power APU platform is the company’s fastest-growing one ever. The server business has regained momentum, and AMD”s goal is to “consistently deliver on its commitments.”

In a conference call with analysts, Read said that the PC supply chain has proven to be very resilient despite flooding in Thailand that hurt shipments of hard disk drives. He said that the graphics chip business was hurt in part by that supply chain impact, but he noted that servers have now grown for the past couple of quarters.

AMD is the perennial underdog to Intel. This morning, AMD’s market value was $4.55 billion, compared with $136.51 billion for Intel.

About a year ago, AMD’s highly respected CEO Dirk Meyer left the top job after a dispute with the board. On Meyer’s watch, AMD outwitted Intel in server chips with the 2003 launch of its Opteron server microprocessors, and he also settled antitrust litigation with Intel, extracting a $1 billion from the bigger company. But Intel bounced back strong in both server chips and laptops chips, and AMD’s market share hovered around 15 percent to 20 percent.

While Intel shifted its focus into low-power chips, AMD bet heavily on combining graphics and microprocessors in the same chip. It launched that family of chips last year under the Fusion name, but Intel also matched it with a less-capable but adequate combo chip dubbed Sandy Bridge. Meanwhile, AMD has been sparring back and forth with Nvidia to provide the fastest graphics processor, a title that AMD says it now owns. AMD said its newest family of APUs will be offered by one of the world’s biggest computer makers in early 2012.

Read now has AMD readying its slate of chips for the introduction of Windows 8, the new operating system from Microsoft that is expected to hit the market later this year. Graphics chip revenue declined 5 percent from the previous quarter and 10 percent from a year ago, mainly due to a decline in mobile graphics chip sales. But the company did say that it launched the world’s fastest desktop graphics chip in December.

AMD’s gross profit margin was 46 percent. The company has $1.9 billion in cash now.

Dean McCarron, an analyst at Mercury Research, said, “As appears to be the case with Intel, server products provided
stability in the quarter. So both companies appear to have experienced a weaker client market, consistent with impact from hard disk availability and early indications of an economic downturn. Graphics was down, and attributed to weakness in mobile. This is consistent with mobile having seasonal weakness in Q4, compounded by the drive availability issue and some OEMs (original equipment makers, or computer makers) leaning out inventory in preparation for the spring platform refresh cycle.”