Today marks the one-year anniversary of Box’s IPO.  After a 10-month wait from its original S-1 filing, the offering was initially touted as a success. Headlines like “Box Stock Soars 70% At IPO” seemed to declare, “See… Unicorns Are REAL!” Unfortunately, the $23.23 closing price that day would be the high-water mark for Box shares. Less than two weeks after the IPO, shares dropped to $16.66 and continued to decline below the $14 IPO price on August 6 as the six-month insider lock-up ended. The sell-off continued through the fall, dropping again after a short-lived rally to a 52-week low of $9.40 on January 19, 2016 – less than half its IPO closing price and a decline in market cap of almost $1.7 billion.

As an investment vehicle, the stock has been a disappointment – down 58% on the year compared to a Nasdaq decline of 6%. What happened? How did a company valued at $2.29 billion by private investors decline so relentlessly in its first year in the public markets? And what does this mean for other cloud file sharing companies, the SaaS category, or the technology sector at large? Is the sky falling? Is it a unicorn apocalypse? In short, does Box’s lackluster stock performance mean the party is over?

[Full disclosure: I’m COO of Hightail, and we indirectly compete with Box. They are bigger than us and focus more on large enterprises across various industries, while we target small-and-medium businesses in creative industries such as consumer goods, advertising and media & entertainment. Although I’m not a Box shareholder, I can’t claim to be completely impartial. My assessment of Box is not only as a competitor, but also as a comparable for how our company should be valued. I should also note that I’m far from an accredited financial advisor. These opinions are my own observations and are not a recommendation to buy or sell shares.]

The Box backlash has been widely documented. Unlike its decacorn namesake, Box’s financials are public and subject to scrutiny. From the moment the S-1 was filed, the chorus of criticism began. And, particularly for those unfamiliar with the economics of a SaaS business, there’s a lot not to like in Box’s financials.

Most notably, Box is burning a significant amount of cash. Box’s first year as a public company saw it lose about $144 million of free cash flow.  For those keeping score at home, that is most of the $163 million Box raised in its IPO ($175 million raise, less $12 million in fees). The company’s spending on sales and marketing has been particularly aggressive – nearly equaling its total revenue last year and pacing at 2.4X its spending on R&D this year.

As a result, its cash balance relative to burn isn’t great. Despite raising a whopping $734 million in the life of the company, Box’s October balance sheet (its most recent 10-Q filing) showed a net cash balance of $167 million — about 20 months at the current burn rate. The market recognizes that this path is unsustainable and is factoring it into the company’s valuation. Either Box will need to reduce its burn via revenue growth or expense reductions, or it will need to conduct yet another fundraising – resulting in dilution that will further pressure the stock price.

Upon closer scrutiny, however, there is also a lot to like in Box’s numbers. And several financial trends over their past 2 years of public financials are quite impressive.

Foremost, Box’s revenue growth continues to be solid. Although its growth rate has tapered from the 74% increase it realized last year, this year’s revenue growth is expected to come in 39% above fiscal year 2015 (Box’s 2016 fiscal year ends January 31, 2016) – increasing from $216 million to $300 million. Not bad at all given the factors at play in the broader file sharing sector, and it suggests their huge investment in sales and marketing has paid off.

Further, this revenue growth is likely to continue. Like all SaaS vendors, revenue is recognized as the service is delivered, but customers often sign up for multi-year deals. So bookings (the full deal value of the contract, or “billings” as Box calls them) are a strong leading indicator of future revenue. And Box’s bookings increased at a faster rate (42%) than revenue last year. Another strong indicator of future revenue growth is Box’s retention rate, which averaged 122% last year. This means Box was able to successfully expand its total account value by 22% by selling additional seats to its existing corporate customers.

Another positive trend is Box’s declining operating losses. Although Box has not reduced expenses in absolute terms, they have declined meaningfully in relative terms. Total operating expenses only increased 8% this year. Couple this relatively modest increase with its revenue growth, and Box’s operating losses as a percentage of revenue have declined substantially in the last two years – from over 100% to the current rate of about 40%. As shown in the chart below, if you simply extrapolate the company’s growth trends for revenue and expenses another year, this percentage could get as low as 12%. Not quite the break-even Box is aiming for by January, 2017 (and reiterated by Aaron Levie on CNBC Friday), but it’s not a Herculean feat to close that gap either. 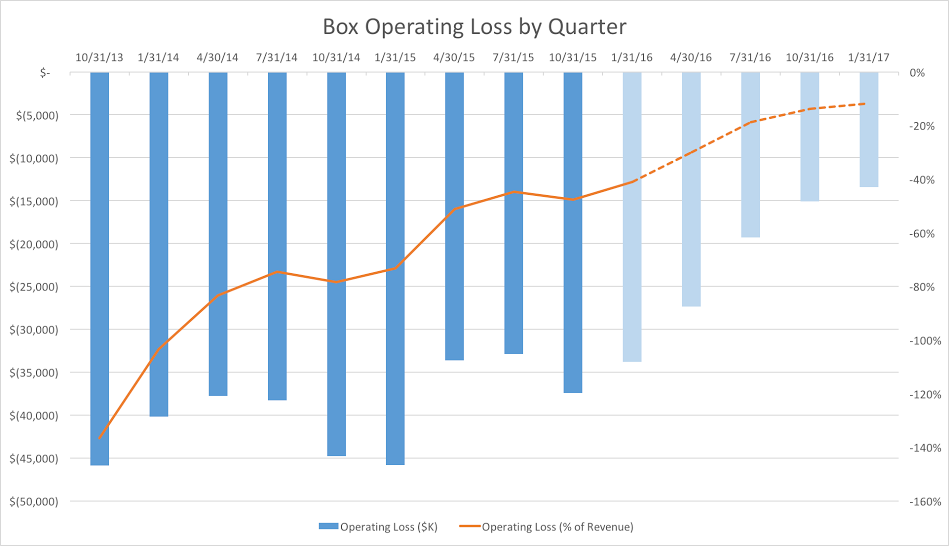 Perhaps the most important favorable trend for Box is the natural dynamics of SaaS businesses. Because revenue is recognized over time and metrics tend to be very consistent, the business itself is highly predictable. And Box has taken advantage of that predictability by consistently beating its financial targets – something the Street likes.

Although Box and its executive team have been criticized for everything from leaving IPO money on the table to making more money for its investors than its founders, what the team has pulled off is, in many ways, quite remarkable. Box has successfully transitioned from an arguably over-valued unicorn to a publicly-traded company that has grown into its own fact-based valuation. In short, it stuck the landing when a lot of people were predicting a crash, achieving liquidity for its investors and employees along the way.

The decline in stock price, while easy to critique (and, no doubt, painful for shareholders), in many ways helped afford that soft landing. Box ended the year at a very reasonable $1.28 billion market cap, or about 4X trailing revenue – hardly irrational (maybe even a buying opportunity for a larger vendor looking for a foothold in enterprise cloud storage), and a much better place to be than the private unicorns that are wringing their hands over the current retrenching in both public and private equity markets. Although many of those companies pursued a similar big-raise, big-spend approach, their financial fundamentals may make it difficult for them to follow Box’s path.

Mike Trigg is COO of Hightail and manages all marketing, lead generation and e-commerce activity. Prior to Hightail, he founded an online gaming company called Spitball Entertainment and was VP of marketing and business development at hi5 (sold to Tagged), where he helped launch the company’s games portal, virtual currency, and original social game titles.