Twitter app store Oneforty is ramping up its offerings around paid apps, giving developers the ability to sell their services on the site. It also confirmed that it closed a $1.85 million first round of venture-backed funding, which we previously reported on here.

The company is rolling out an e-commerce platform for one-time app purchases. It’s taking a 25 percent revenue share, which is roughly on par with the cut other app stores receive. The site will still offer plenty of free apps, but if developers want to charge, there’s a minimum price of 99 cents.

Since launching last fall, Oneforty has gone from 1,300 apps to 2,300. Oneforty collects information and reviews of apps by relying on its community to write about, tag and rate them. Twitter itself says there are 50,000 apps in its ecosystem, but Oneforty founder Laura Fitton says that’s not quite accurate because the company is counting how many requests its gotten for application programming interface keys, not apps that are actually built.

Fitton is a veritable Twitter maven. She wrote the book on it, literally — “Twitter for Dummies” — and amassed a large following early on in the company’s history. With the funding, she hopes to grow the company to eight to 10 employees from the current five.

Through watching Twitter’s ecosystem develop on the site, she says apps are getting much more sophisticated user interfaces for very specific use cases. Fitton thought that Oneforty had met some strong unmet demand for apps on the Android and Blackberry platforms. She says developers shouldn’t be afraid to charge for premium services, and going forward, a lot of Oneforty’s commercial success could center around apps for enterprises.

She also doubted that the company would make any major acquisitions of Twitter clients like Seesmic or Tweetdeck.

“I kind of laugh about the notion of a Twitter client war and that one will win,” she said. “Twitter has a lot of use cases. People like to play the “Is Twitter going to buy me?” game, but mergers and acquisitions aren’t really advantageous to Twitter when they have this huge ecosystem to support. They’re always walking a fine line between stimulating the ecosystem and killing players if they acquire competitors. They’ve always been very aware that they need to focus on growing their core. What they do with technology is insanely complex.”

Oneforty’s first round was led by Flybridge Capital Partners and included Javelin Venture Partners, Dave McClure and Roger Ehrenberg among other angel investors. Flybridge’s Jeff Bussgang (@bussgang), former Jefferies & Co. investment banker John Prendergast (@johnprendergast) and CEO Laura Fitton will form the company’s board of directors. We previously reported that the company aimed to raise $2.4 million when it was revealed in an SEC filing. 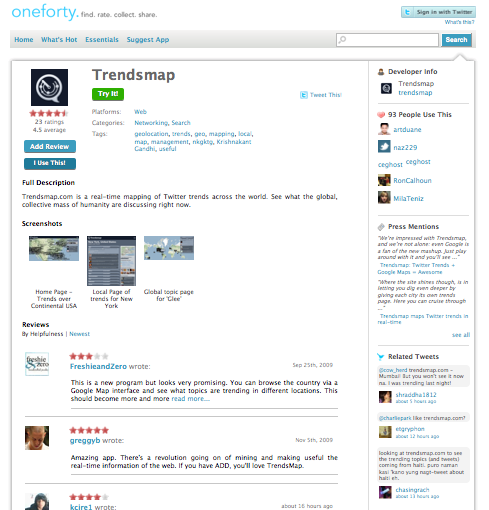