Startup founders often make bold claims about disrupting entire industries. Dr. Tom X. Lee is one such entrepreneur, but in this particular case, his company is already shaping the future of healthcare.

Dr. Lee is the founder and CEO of One Medical Group, a chain of concierge primary care practices operating under the tagline, “The doctor’s office. Reinvented.”

As a long-time customer, I can attest that this marketing speak isn’t an exaggeration. Feeling unwell? Book a same-day appointment online or via a smartphone app at your nearest doctor’s office, show up, fill out a form or two, and you’ll be seen within minutes. 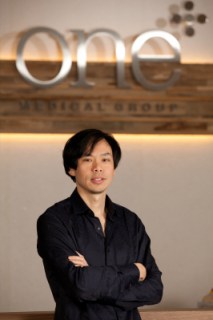 Dr Lee is a physician-turned-entrepreneur who received an MD from the University of Washington and MBA from Stanford University. “It was pretty clear in my medical training that the goal was to practice old-school medicine,” he said in an interview with VentureBeat.

The model proved to resonate with customers, so the group has been opening offices in new markets, including Boston and New York. And today, it just closed its sixth round of funding led by Google Ventures with participation from existing investors, including Benchmark Capital and DAG Ventures.

One Medical may not be a Silicon Valley startup in the traditional sense, but it has embraced technology from the outset. Patients can use a mobile app to schedule an appointment or refill a prescription, or chat with a doctor via instant message. For this reason, it has been an attractive option for Silicon Valley’s tech investors, and has raised $77 million to date.

Dr. Lee spent six months undercover to root out the biggest flaws with the current system. He worked in a large and unnamed primary care practice in various occupations, including nurse, administrator, physician and secretary. During that time, he learned that doctors are “overburdened” with personel, and held back by paper-based systems.

“What we are trying to do is introduce a small local office solution that has the technology infrastructure of a Kaiser, Mayo Clinic, or University of San Francisco,” he said.

By reducing overhead and administration, the company has also been able to offer medical care at a cheaper rate.

The group accepts almost all insurance plans, including PPOs and HMOs, but asks that customers pay $149 a year to support those who don’t have insurance, and enable the company to invest in new technology. For those without insurance, it costs about $150 a visit, which is still cheaper than most alternatives.

One Medical currently boasts 23 offices around the country with 13 in the SF Bay Area, six in New York, two in Washington, D.C. and one each in Chicago and Boston, and more planned to open this year.