OnePlus’ latest announcement is something of a curveball: The Chinese smartphone maker is soon to add smart television maker to its title with the launch of the OnePlus TV.

Founder and CEO Pete Lau revealed that he will head up the new TV division while remaining in control of the smartphone unit and said that he’s looking to capitalize on the burgeoning smart home industry.

“For most of us, there are four major environments we experience each day: the home, the workplace, the commute, and being on the move,” Lau said. “The home — perhaps the most important environment experience — is just starting to enjoy the benefits of intelligent connectivity.”

The Shenzhen-based company launched its first smartphone way back in 2014 and has since followed up with seven more devices — with another one scheduled for launch later this year. OnePlus, of course, already sells non-smartphone products, from earphones and power packs to various other OnePlus-branded accessories. However, the television realm represents a completely new course for the company.

Name of the game 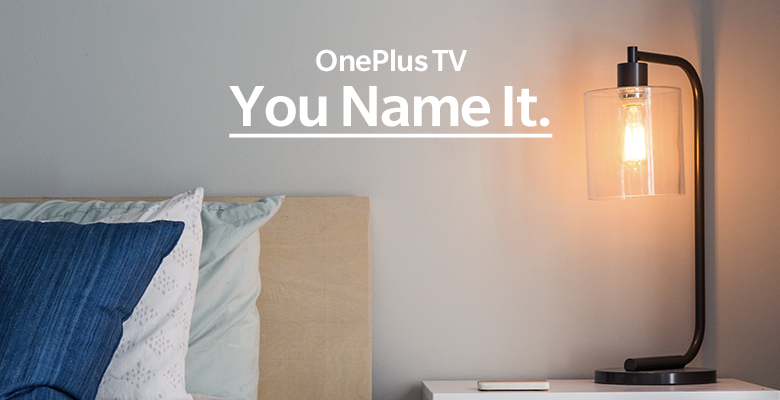 Above: OnePlus TV: You name it

OnePlus hasn’t revealed a timescale for the TV, which it is internally calling OnePlus TV — however, it has opened a contest for users to name the product.

Crowdsourced naming endeavors have ended in spectacular fashion in the past, but thankfully OnePlus isn’t using a public vote for the final name — it will choose its favorite suggestions from the entries. The winner will scoop up a new OnePlus TV (or whatever it will be called) and a trip to the launch event.

While this move represents a significant departure from the company‘s core focus, it should not come as too big a surprise, given the recent history of other Chinese smartphone makers moving into new product categories. Xiaomi, for example, launched its first Android phone back in 2010, and today it sells tablets, routers, TV set-top boxes, laptops, and smartwatches.

OnePlus is simply taking its growing reputation in the smartphone world and leveraging it to sell other products — after all, brand recognition goes a long way when it comes to attracting consumers. As with its first OnePlus phone all those years ago, the company is encouraging its community of users to suggest features and design specifications for the new TV. Things are different this time around, though — OnePlus is an established company with many eyes on it, so it will be interesting to see what it cooks up.

“I dream about a time when technology is truly seamless, an effortless part of your life without being the focus,” Lau said. “As other consumer electronics have evolved and improved our lives, televisions have remained conventional and cumbersome. We bring inherent advantages to the industry, and with this new division we’re excited to explore the total connected user experience that can enhance everyday life.”