The announcement came at the company’s OnePlus 7T smartphone launch in India.

OnePlus first revealed plans to launch a TV in September last year, and at the time it asked the public to suggest names for the final product. Last month, the company officially announced the name it would use for its new device, which was — somewhat unsurprisingly — OnePlus TV.

True to form, OnePlus has been teasing the product in recent weeks, with cofounder and CEO Peter Lau previously confirming that it will run on an “optimized” version of Android TV, while later he posted a picture of the remote showing that it charges by USB Type-C, rather than requiring replaceable batteries.

Take a closer look. The power is in your hand! #OnePlusTV pic.twitter.com/TL5ymlOWIz

The Shenzhen-based company launched its first smartphone way back in 2014, and in the intervening years it has followed up with 11 more devices, including today’s 7T launch. While the company has introduced other hardware accessories, such as earphones, power banks, and even a VR headset, the OnePlus TV represents a milestone moment for the company as its first smart device that isn’t a smartphone.

While a number of specs leaked in the build-up to today’s event, OnePlus has now confirmed most of the things you need to know about the TV.

“We did not want to make an ordinary TV, we wanted to make one that would meet the highest standard of the industry,” Lau said at the event today. “Just as we did for smartphones, OnePlus TV will redefine the smart TV experience.”

The OnePlus TV sports a whopping 55-inch 4K QLED display with a 16:9 aspect ratio, and supports HDR and Dolby Vision. Elsewhere, the TV features 3 HDMI ports, 2 USB slots, an ethernet port, and Bluetooth 5.0 capabilities. It also comes with built-in Chromecast and the usual array of apps such as Netflix.

Under the hood, the slightly modified Android TV operating system (OS) will be known as Oxygen OS TV, similar to its smartphone OS.

During an on-stage demo, OnePlus showed some of the software features of the TV, in particular how it’s designed to connect with your smartphone. Indeed, OnePlus Connect is essentially an app on your phone that lets you navigate the TV’s interface, while there is a Google Assistant button embedded inside OnePlus Connect that lets you open apps or search for content with your voice. Separately, an integration with Alexa allows users to turn on their OnePlus TV through an Amazon Echo smart speaker by saying, “Alexa, turn on my TV.”

Elsewhere, Oxygen Play on the TV lets you search for content — movies, TV shows, etc. — across all the installed apps. 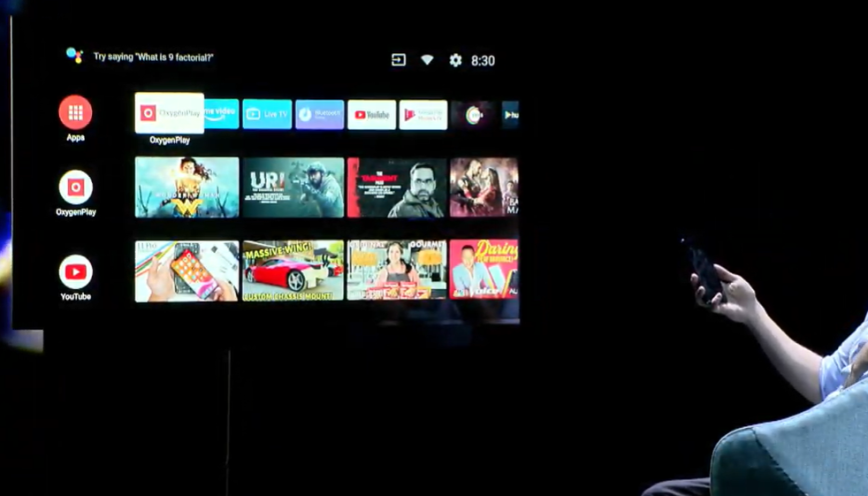 The OnePlus TV will ship in two variants starting from September 28: the OnePlus TV Q1 and OnePlus TV Q1 Pro, costing 69,900 rupees ($985) and 99,900 rupees ($1,400) respectively. Both are very similar in most regards, the one notable difference being that the Pro incarnation has a soundbar that comes out the bottom. This soundbar, which features a 50-watt output, counts eight speakers in total — six facing the front, and two facing the back.

While it’s worth noting that today’s event was all about India, OnePlus has another event scheduled for October, where it is expected to announced the global launch details for its new smartphone and, presumably, its smart TV.