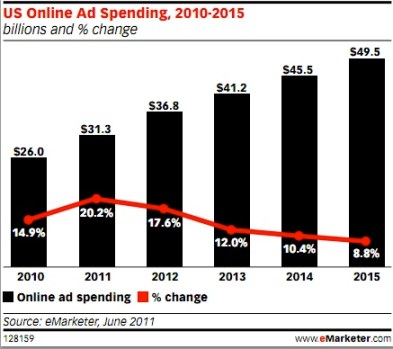 Advertisers are likely to spend $31.3 billion buying online ads this year, 20 percent more than last year. That’s according to the encouraging forecast from market researcher eMarketer — and it’s almost twice the 10.5 percent growth in 2011 that eMarketer predicted in December.

This is great news, right? A solid rebound!

Well, sort of. The economy kicked into gear, advertisers got their budgets back, and they needed to spend it somewhere. And where did they put it? Online, of course. Not only are people spending more time online, the advertisers also saw excess online inventory being pumped out by the publishers, and they took advantage by buying it at bargain rates.

In other words, advertisers are buying more ads, but there’s so much inventory that it’s depressing rates.

EMarketer principal analyst David Hallerman says his firm doesn’t officially track market ad rates (CPMs, or cost per a thousand impressions) and doesn’t know anyone who does it well. So he bases his assessment of CPM trends on anecdotal information, such as interviews with publishers and other market vendors. He says it’s clear that growth of overall ad impressions is faster than the growth of banner ad spending.

In other words, Hallerman says, “Pricing has come down.” CPMs for banner ads can be as low as $1, “and that’s with targeting on top. … You don’t see run of network ads as much,” he says.

In general, smaller sites will be hurt more by lower pricing than bigger or more focused sites, which are better able to command higher CPMs, he said. He listed the WSJ, the New York Times and VentureBeat as examples of bigger, higher-CPM sites.

But overall, it means most publishers are having to pump out more page views just to stay in place.

The other notable development: For the first time, display ad spending is within striking distance of search advertising spending. Even though search will continue to grow strongly over the next five years, eMarketer estimates display ad revenue will surpass search revenue within that period (see graphic). Banner ads, sponsorships, and video ads are all growing even faster than search.

And finally, a note on mobile ads: The number of advertisers using mobile display ad campaigns has more than doubled in the past two years, according to a separate report released today by Comscore. It said mobile content and publishing account for half of all products advertised on mobile devices.

Still, mobile dollars make up an extraordinarily small portion of the overall ad pie. As of last year, it was between 2.1 to 2.5 percent of total online ad spending, according to eMarketer’s Hallerman, citing industry stats. As a result, mobile ads won’t be a major factor in growth of the overall market for the next year or two, he concludes.