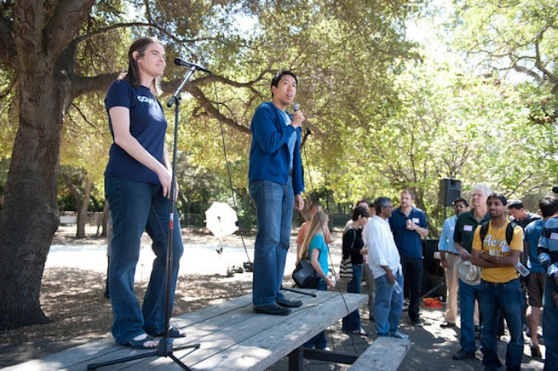 A bill is under consideration in the Senate that would force California’s public colleges and universities to give credit for online courses.

It’s not clear whether it will pass, but the bill appears to have achieved a desired consequence already in sparking debate. Darrell Steinberg, the president pro tem of the Senate said he introduced the bill to ensure that “no college student in California will be denied the right to move through their education because they couldn’t get a seat in a course they needed.”

If if succeeds, this would be the first time a state is mandating that universities grant credit for courses offered by third-party providers, making it a landmark bill.

Coursera is one of the massive open online course providers, dubbed MOOCs, that is working with state legislators and local educators to improve student matriculation rates.

“This bill comes from a realization that the situation for many California students is really in crisis,” said Daphne Koller (pictured, above), cofounder of online course provider Coursera, who was called in to help structure the bill in the preliminary stages.

Coursera, EdX, and Udacity will likely provide the eligible online courses to help students progress through college. A faculty-led panel will determine which 50 introductory courses are the most oversubscribed and will recommend that online versions of those courses be available for credit. A student would only get credit from a third-party provider if the course is full at their college or university.

Due to budget cuts, thousands of students are on the waiting list for a basic and introductory algebra class, which is a requirement. This prevents many students from graduating from a four-year degree program on time.

Senator Steinberg, a Democrat from Sacramento, told the New York Times that the state’s 112 community colleges each had an average of 7,000 enrolled students who were on waiting lists, and at the 420,000-student, 23-campus California State University, only 16 percent of students graduate within four years.

It’s a problem that isn’t confined to California. An estimated 37 million people in America have some college experience, but no degree.

A handful of Coursera’s online courses were recently approved for college credit by the American Council on Education (ACE), ahead of its competitors. The problem, which Koller refers to as the “bottleneck” is that colleges still need to accept those credits for transfer.

Universities are realizing that it’s not the best use of resources to have multiple instructors teaching the same introductory calculus class when Coursera has an accredited online version.

“MOOCs have a huge role to play in addressing the quality and capacity issues we’re seeing in the California education system,” said Koller.

Gov. Jerry Brown has been a huge supporter of online education as a means to reduce college costs. In November, Brown made a comparison between the University and California and the U.S. Postal Service, both “venerable institution[s] being upended by digital change.”

However, it’s not clear whether the bill will pass. Innosight Institute researcher Michelle Rhee-Weise said it may prove to be highly controversial, especially among students and faculty.

In the short-term, schools may allow students to enroll in an online course, rather than one of their own oversubscribed classes. But it’s not a solution to solving California’s education woes.

“These low-level courses are really the largest source of revenue for the university because [they’re] large classes often taught by grad students and a few instructors,” she said. “I think that universities will have a hard time letting go.”

Likewise, students across the country are experiencing budget cuts and may view this bill as a quick fix. Thursday, a group of students will rally to combat downsizing at the City College of San Francisco.

“They feel like the only reason their class sizes are too small is that their funding was cut in the first place,” said Charlotte Hill, a current student at the City College. “So [the bill] ends up feeling like a long-term privatization strategy.”

Former California state assembly nominee Kai Stinchcombe said the structure of independence built into the University of California charter may pose a problem, especially if the bill is met with grassroots opposition.

Koller said we have a long road ahead and advised the government to support a “blended learning” format, meaning a combination of face-to-face classroom methods with computer-mediated activities.

“I think this is an important first step to solving a critical need, but it’s not the full solution to combating high student dropout rates,” she said.