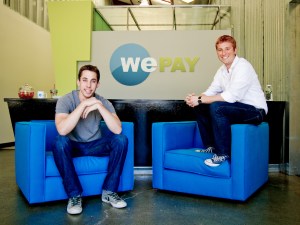 It’s nearly impossible to describe WePay Stores without sounding like a commercial. It really is a simple solution for merchants without programming experience or technical ability. It takes a few minutes to start a store and you don’t need a merchant account. WePay handles payments, hosting and shopping cart. There are no set up fees, contracts or monthly fees. You sell items by uploading an image, adding a description and setting a price.

“Most merchants, including those that use PayPal, have to go figure out two different companies, one that offers payments and another that offers an online store,” says WePay CEO Bill Clerico (pictured far right). He founded the company in 2008 along with COO Rich Aberman (also pictured). “It’s up to the merchant to get them to work together, and figure total cost. Instead, we hold your hand through the design and payment process.”

The WePay Store also lets merchants embed a pre-designed store into an existing website or blog with one line of code. The API is available to a small group of merchants, starting today. You need to contact the company to get on the list.

To see an example of a WePay store, check out StartupTees.com. Yes, this is a real business. WePay set up StartupTees with a store on July 11 to start testing the product. By July 12, StartupTees sold “more than 20 shirts” and “generated hundreds of dollars in revenue.” Those figures are pretty adorable, but the point is, this is the type of small merchant WePay is targeting. Another is RebeccaKay’s Crafts, by an artist who is “trying desperately to make it to Chicago in August” so she’s “selling crafts of all shapes and sizes.” By going after the little crumbs, WePay could take the cake.

PayPal is the Goliath of payment companies, and there are many Davids out there trying to bring it down. There’s Yahoo! Small Business, OScommerce (they use PayPal for payments), Shopify and others that have used tech slingshots to go after PayPal.

WePay could be lumped in with those Davids, but it just might have the right secret weapon to bring PayPal down: PayPal founder and former CTO Max Levchin is a WePay investor.

Levchin is currently a VP of engineering at Google Slide devision. To give you an idea of what that position means, he reports directly to Google founder Sergey Brin. Levchin joined Google  after his company, Slide, was acquired in 2010. Slide recently launched Photovine.com, a photo sharing service that not a whole lot is known about yet (here’s a video Google released that gives a general idea of how it works). Basically, Levchin gets to work with Google executives on one-off projects. He is kind of a big deal, in the words of Ron Burgundy.

Why Levchin has chosen to get behind WePay becomes obvious when you speak with 25-year-old Clerico. He is scrappy and determined. Clerico wants to take PayPal down and isn’t afraid to say it.

“PayPal is the giant, but there are lots of things that aren’t so great about it,” he said in a phone interview with VentureBeat. “A large slice of the market has had a horrible experience with them. Long hold times to get customer service, frozen accounts, bad design. In a lot of ways we compare ourselves to Virgin America. Let’s talk about bad customer service in an industry that has had little innovation and then do something about it.”

Another WePay strength is its small startup status. The company can turn on a dime to meet the needs of customers.

“We are constantly revamping flow and testing users,” said Clerico. “We’re in a never ending iterative process. When PayPal gets an idea, it can take a year for them to make it happen. With us, we get everyone in one room and make the decisions quickly.”

Quick is a critical theme for WePay, and so is design.

“Design is core to who we are,” said Clerico. “Merchants with little or no design experience benefit from our research and tested design.”

When it comes to competitors besides PayPal, Clerico is unafraid to call them out and draw clear distinctions. You would be surprised at how many CEOs hesitate to talk about competitors. Clerico is not one of them.

“Google Checkout has some of the same features [as WePay], but they have advanced features that not everyone wants to deal with,” Clerico explained. “Like printing shipping labels. That was meant for high-volume shippers and doesn’t apply to 90 percent of the merchants out there. We’re just focused on getting setup simple and fast. We will be working on rolling the features the other 10 percent of customers need.”

“With Etsy you pay two sets of fees,” he added. “So most Etsy sellers are paying six to seven percent to sell. They get an audience and it works as a marketplace, but a lot of our initial stores have their own Facebook and Twitter followers, so they market through social networking channels. As we get more merchants, we see ourselves working more like Etsy.”

This is Clerico’s first startup.

“I’m a recovering investment banker and before that I was a college student,” he says. “I went to Boston College. No Stanford for me.”

There he goes again, picking fights.