Online recruitment behemoth Monster has been acquired by Netherlands-based human resources (HR) consulting giant Randstad in a deal worth $429 million.

A result of the merger between The Monster Board (TMB) and Online Career Center (OCC) in 1999, Monster emerged as one of the preeminent brands in the online recruitment realm. But, as with many brands that survived the first dotcom bubble, Monster has struggled to regain its former glory — the company hit its peak with a share value of more than $91 in 2000, a figure that has more or less been in perpetual decline ever since. Indeed, Monster’s shares have fallen from around eight dollars last September to less than three dollars today. 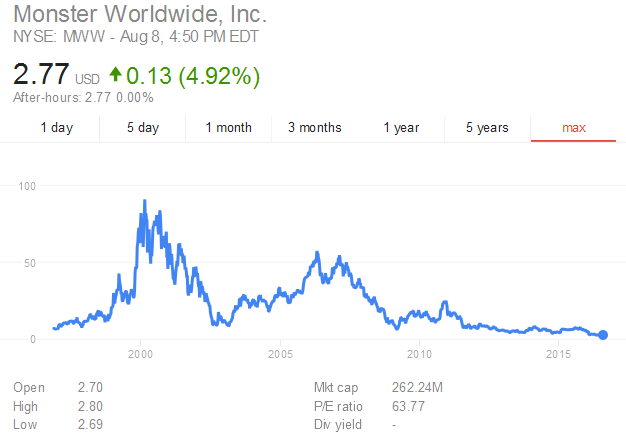 Above: Boom or bust

Under terms of the deal, Randstad will pay Monster $3.40 per share in cash — more than the value of Monster’s shares over the past few months but substantially less than their value in its halcyon dotcom days. And this premium, which amounts to more than 22 percent on Monster’s closing value yesterday, is what Randstad hopes will convince shareholders to greenlight the deal.

Moving forward, Randstad said that it will “bridge” two distinct but complementary parts of the recruitment process and will seek to create the “world’s most comprehensive portfolio of HR services,” according to a statement. Monster will continue operating as it currently does, under its own brand.

“In an era of massive technological change, employers are challenged to identify better ways to source and engage talent,” said Jacques van den Broek, CEO of Randstad, in a press release. “With its industry-leading technology platform and easy-to-use digital, social, and mobile solutions, Monster is a natural complement to Randstad. The transaction is aligned with our Tech and Touch growth strategy and reflects our commitment to bringing labor supply and demand closer together to better connect the right people to the right jobs.”

Randstad may not have the consumer mindshare enjoyed by Monster, but the Dutch company is among the world’s biggest HR firms, with 30,000 employees globally and revenues of around $20 billion in 2015. The company is no stranger to acquisitions either, having snapped up rival Vedior for $3.3 billion in 2007. And in 2016 alone, Randstad bought Italy’s Obiettivo Lavoro for $113 million, Japan’s Careo Group for an undisclosed sum, and Germany’s Twago.

While acquisitions have played a pivotal part in Randstad’s growth, perhaps the most surprising facet of today’s acquisition is that Monster itself has been in acquisition mode lately, and was showing no signs that it planned to sell so soon. Back in June, Monster bolstered its mobile recruitment credentials with the acquisition of job search startup Jobr. “Bringing the Jobr app and team to Monster will enhance our leading global talent platform for job search, people search, and related solutions across mobile channels,” said Mark Stoever, president and chief operating officer at Monster, at the time. It’s not clear whether the company was actively seeking a buyer, but Monster may have been pushing to make itself a more attractive proposition to prospective suitors — that was certainly a happy by-product of the deal, if nothing else.

We’ve seen a ton of activity elsewhere in the online recruitment space of late. Back in June, Muse raised $16 million to grow its recruitment service for millennials. This came shortly after Spain-based Jobandtalent’s $42 million raise and fellow European startup Job Today’s $10 million round. Earlier in the year, techie jobs marketplace Hired nabbed nabs $40 million and acquired three companies in the U.S., France, and Australia, while Handshake raised $10.5 million to help college students search for jobs and internships.

So it’s clear that there is demand for online recruitment smarts, but with increased competition, there will always be a degree of consolidation. Younger, nimbler startups will garner the attention of their bigger counterparts, while long-established companies (like Monster) which have struggled to keep shareholders happy will seek the best possible outcome given the circumstances — and, in this case, an exit to a much bigger corporation.