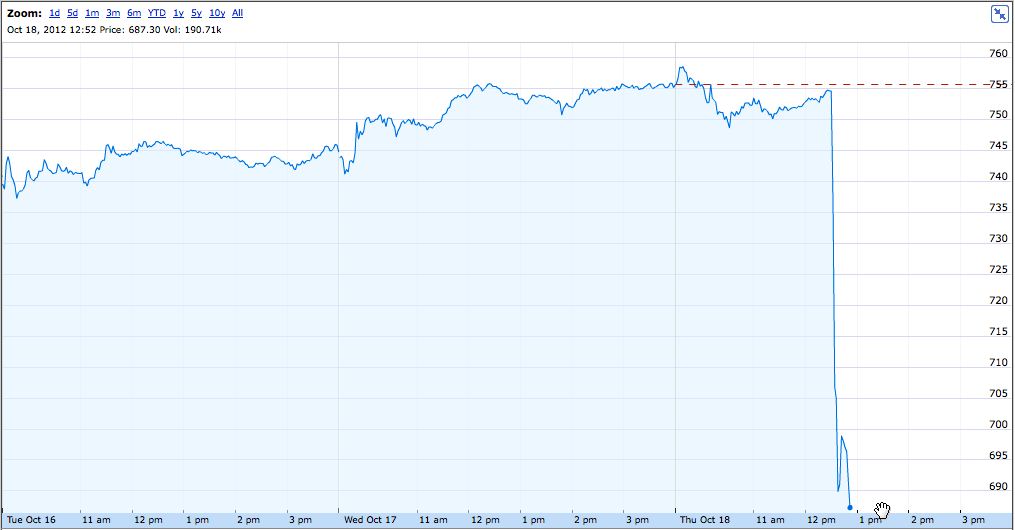 Google’s third-quarter earnings report seems to have been mistakenly published this morning rather than at the end of the trading day. Earnings per share are $9.03, down from analysts’ projections, and the stock has dumped almost 10 percent of its value before trading was halted.

Early indications are that the company requested the halt — it was not an automated stop imposed by NASDAQ.

Google had revenues of $14.1 billion for the quarter ending September 30, which is a 45 percent increase from the year-ago period. Net income, however, was only $2.18 billion, down from $2.73 billion last year.

Google’s own sites generated $7.73 billion in sales, up 15 percent, while its distributed network generated $3.13 billion, up 21 percent. Paid clicks on both also rose, up 33 percent over the same quarter last year, and up six percent on this year’s second quarter.

With good news like that in the ad network, you’d expect Google’s profit — and stock — to be up. But Google is no longer strictly a technology company or the world’s biggest ad network: It owns a much more traditional-looking mobility company. And with a $527 million loss in its Motorola segment, Google is discovering that running old-school companies with actual physical products can be challenging.

But the big news is the almost-unprecedented premature release, which almost certainly contributed to the frenzied sell-off. Google appears to be blaming that premature release on RR Donnelley, a printing company, of all things.

Google has issued a statement, which Business Insider has, saying:

“Earlier this morning RR Donnelley, the financial printer, informed us that they had filed our draft 8K earnings statement without authorization. We have ceased trading on NASDAQ while we work to finalize the document. Once it’s finalized we will release our earnings, resume trading on NASDAQ, and hold our earnings call as normal at 1:30 p.m. PT.”

What a disaster for Google.

Just recently as Google’s stock was soaring to a new all-time high, the scuttlebutt in Silicon Valley was that Google engineers were thoroughly enjoying Facebook’s post-IPO woes.

While this too shall pass, and it really shouldn’t have any significant long-term impact for Google, the morning’s massive gaffe should wipe a few smiles off Googler faces.