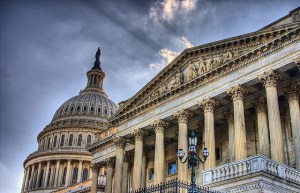 Hoping to amplify the voice of the Internet, web companies including Mozilla, Reddit, and WordPress have banded together with public interest and human rights groups to urge Congress to stop its work on intellectual property laws.

Monday, more than 70 organizations signed an open letter addressed to the House of Representatives and the Senate.

“Now is the time for Congress to take a breath, step back, and approach the issues from a fresh perspective,” the letter reads. “The concerns are too fundamental and too numerous to be fully addressed through hasty revisions to these bills. Nor can they be addressed by closed door negotiations among a small set of inside the-beltway stakeholders.”

The letter, embedded below, comes in the aftermath of a powerful Internet protest that helped to defeat, at least temporarily, the Stop Online Piracy Act and the Protect IP Act, two controversial pieces of IP legislation that were making their way through Congress. But, as the letter notes, the bills aren’t dead yet.

“Finally, any future debates concerning intellectual property law in regards to the Internet must avoid taking a narrow, single-industry perspective,” the letter continues. “Too often, Congress has focused exclusively on areas where some rights holders believe existing law is too weak, without also considering the ways in which existing policies have undermined free speech and innovation.”

Unfortunately, as we see it, the letter is far too generic in purpose, weak in message, and broad in audience to make any real impact on Congress. The clout of its signers, however, may help the letter win more favor from those who oppose SOPA and PIPA. And, ideally, the letter could rally enough support to keep the web focused on the task at hand: preventing Congress from spitting out irresponsible legislation.