The burgeoning backend-as-a-service (BaaS) market has ushered in a handful of young upstarts that are leveraging open source to disrupt incumbents like Google’s Firebase. And investors have taken note — just a few weeks ago, Supabase secured $30 million, while Nhost landed a $3 million investment in April.

BaaS allows companies and developers to forget about infrastructure and put their spadework into the front end. The appeal of open source in the BaaS space is that businesses aren’t locked into any specific ecosystem and can move the service to any production or development infrastructure host.

Appwrite is an entirely self-hosted solution, packaged as Docker microservices for web or mobile app development, and includes user authentication, file storage, a database for storing and querying data, API management, security and privacy, and more. 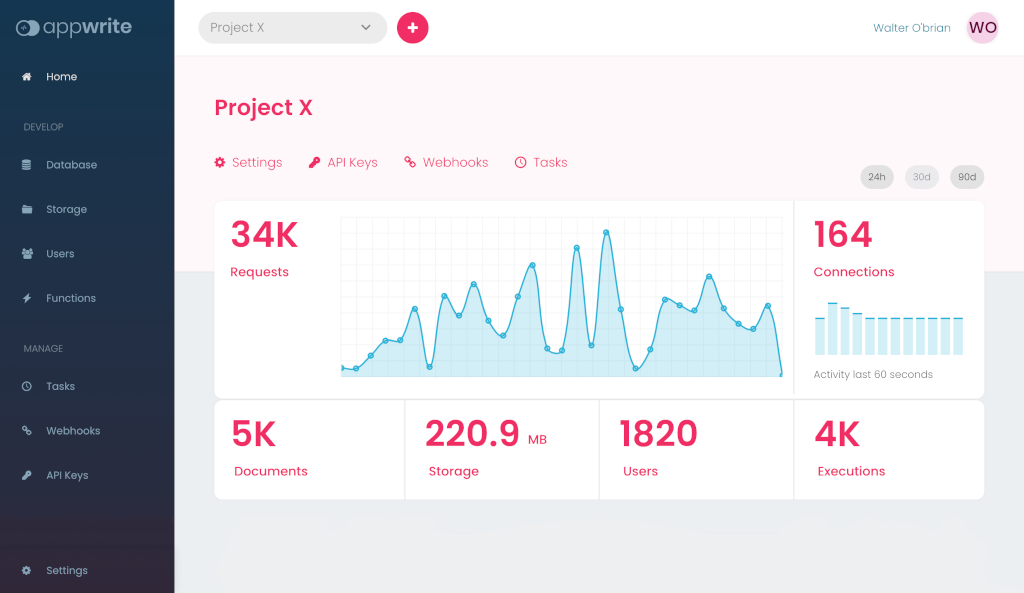 Founder and CEO Eldad Fux built Appwrite from scratch and open-sourced the project back in October 2019. A year later, he formally founded the company and recruited the project’s core maintainers from the open source community as full-time employees. For now, Appwrite remains an entirely free, self-hosted solution available on GitHub, although a commercial cloud offering is planned for later this year to allow developers to “onboard Appwrite” more quickly.

“Our team is currently focused on making our open source solution the best possible and ensuring we continue to build a vibrant and exciting OSS community,” Fux told VentureBeat. “We believe that backend-as-a-service is one of the most interesting markets out there. Together with our OSS community, we believe we can build new innovative business models without hindering our open source offering like other OSS companies are sometimes forced to do.”

Given that Appwrite is still technically in beta, its focus has been on individual developers, though Fux notes that these include members from major companies like Amazon, Apple, Microsoft, Alibaba, IBM, Cisco, and more.

While Firebase has emerged as one of the leading players in the BaaS space since Google acquired the company back in 2014, the startup had previously raised some $7 million from investors that include Flybridge Capital Partners. So it seems fitting that Flybridge is now investing in Appwrite eight years later. Other Appwrite investors include Bessemer Venture Partners, Ibex Investors, and Seed Camp, alongside angel backers such as Elastic cofounder Uri Boness and Heroku cofounder James Lindenbaum.

The global BaaS industry was pegged at $1.6 billion in 2020, a figure that’s predicted to grow to nearly $8 billion within six years. So what’s driving demand, exactly? According to Fux, it all boils down to removing complexity from developers’ everyday lives — the very same developers who are increasingly driving purchasing decisions in companies.

“There are just too many tools, frameworks, and services that developers need to master,” Fux said. “For example, cloud providers have done a great job abstracting the hassle that was required in managing infrastructure. Still, they created a new level of complexity for developers who need to master endless services that don’t play well with each other. This problem is becoming worse every day. Therefore, abstraction layers like backend-as-a-service are a must if we want to enable developers to focus on innovation rather than on boilerplate and puzzling solutions together.”

Although Appwrite has clear competition in the open source BaaS space, Fux touts the company’s 40,000-strong community of developers building, using, and engaging with other members as an indicator of its strength among rivals.

“Growing as an open source project has been a huge factor in our success — building out in the open with a community of maintainers, advocates, and users who believe in our vision acts as a growth multiplier for us,” Fux noted. “The Appwrite community acts as a ‘secret sauce’ that always points our team and product in the right direction.”

But is there room for so many open source Firebase alternatives?

“As both a developer myself and an insider looking at the recent growth in developer interest in BaaS solutions, it’s very clear that this won’t be a single-winner market,” Fux said. “But there will be a developer favorite, and we believe Appwrite is already in a strong position there and poised to grow even more.”