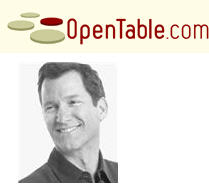 His mandate is to help take the company to the next level, now that it is seating two million diners a month.

OpenTable has said very little about its financial performance. In an interview with VentureBeat Tuesday Jordan declined to mention whether the company is near profitability. However, the company says 7,000 restaurants use the service, and that it has seated 40 million diners since launching in 1998.

Jordan said he enjoys helping companies scale, just as he did with eBay and PayPal. He led eBay’s North America operations for four years until 2004. A CEO change was made at OpenTable, Jordan said, because Thomas Layton, who led OpenTable for nearly six years as chief executive, considers himself a start-up guy. He remains on the board.

Restaurants pay a monthly fee for OpenTable’s combination of hardware and software (you often see the machines at a station at the front of restaurants, where managers can update the system in real-time). It also charges a fee per diner seated. That fees vary according to the size of the restaurant and the number of machines it orders.

In that way, Benchmark as firm feel like a one-trick pony. It has invested in so many online marketplaces you’d think that is all it has up its sleeve. However, it has created enough successes that you can’t criticize the strategy.

You can’t help getting the feeling that Benchmark is putting the pressure on OpenTable. It has raised a significant $50 million in funding from Benchmark Capital, Impact Venture Partners and Integral Capital Partners.