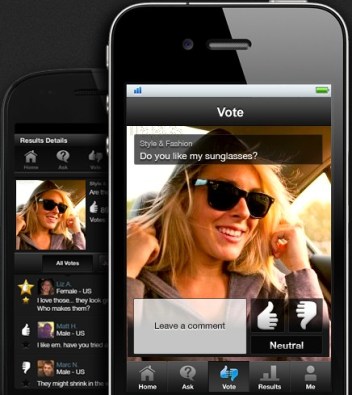 Mobile question-and-answer company Opinionaided has seen massive growth since it launched last year, but its unwieldy (albeit clever) name has likely hurt the company more than it helped.

So the company has decided to simplify things: Today, it’s rebranding itself as Thumb, which is far less of a spelling and pronunciation hazard than Opinionaided, and better reflects the addictive thumbs up and down voting features of its apps.

Under the hood, Thumb’s app, available for free on iTunes and Android (it should come down as an update for existing users), is pretty much the same as Opinionaided. The app allows you to ask questions and get instant responses from the company’s highly engaged user base. You can also give your opinion on other questions from others. There are a few design and performance tweaks, but no major new features.

The rebrand is the first step towards turning Thumb into a full-fledged social network built around opinions. Early next year, the company will add the ability for users to express their opinions more widely and better connect with others, Thumb CEO Dan Kurani told VentureBeat in an interview.

Indeed, Thumb is quickly catching up to Facebook in terms of how engaged its users are. The company said users typically spend around three and a half hours on the app, and most questions asked receive around 70 responses. “It’s almost like you’re being productive while being entertained,” Kurani said.

Thumb resembles other question and answer services like Yahoo Answers and Quora, but its focus on opinions instead of facts is fairly unique.

In addition to getting a simpler name, Kurani tells me that the Thumb rebrand gives the company a better symbolic tie to what users are doing within the apps. The thumb imagery is easily understandable across multiple cultures, and it’s something that easily imparts a lot of meaning.