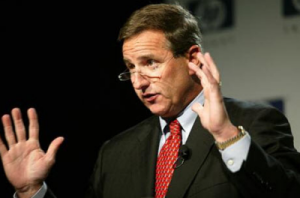 Grab your popcorn! Oracle CEO Larry Ellison’s hire of Silicon Valley neighbor and tennis partner Mark Hurd — who, by the way, just happens to have been freshly ousted as chief of Hewlett-Packard — makes for great theater. But will it be good for business?

Perhaps not, since Hurd’s new career at Oracle is kicking off with a civil complaint from HP, which is charging him with violating the terms of his severance agreement by joining HP’s rival.

The most likely outcome here is that Hurd will have to give up some or all of his HP severance and Oracle will make him whole with some new stock grants. In other words, Oracle shareholders will pay to stop HP shareholders from complaining.

The question Oracle shareholders should be asking: What are they buying? For now, Mark and Larry are best buddies. But Ellison has a history of treating his No. 2 like, well, No. 2. See former president Ray Lane, or more recently, Oracle co-president Charles Phillips, who was unceremoniously shoved aside to make room for Hurd after a progressive lessening of his authority in recent months.

Hurd is famous as a financial operator, someone who can rapidly improve a tech company’s performance. But he’s not seen as a visionary or an innovator. Ellison will retain control of engineering at Oracle, as he’s long done. And Oracle will likely need some cleaning up and reorganization after its acquisition of Sun Microsystems, a hardware maker which launched Oracle into its collision course with HP in the first place.

HP’s civil complaint will likely make the famously combative Ellison fight all the harder to get and keep Hurd. At least for now. But what comes after the honeymoon? Ellison’s history suggests the drama is far from over.

Update: In response to the civil complaint, Ellison is now threatening to, in effect, take his ball and go home: “The HP Board is making it virtually impossible for Oracle and HP to continue to cooperate and work together in the IT marketplace.”