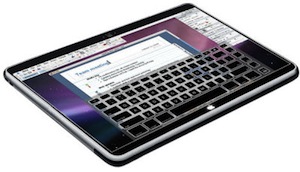 Apple won’t confirm rumors that it will shortly be launching a new tablet computer, but one of its European partners has let the information slip. An executive at telecom firm France Telecom/Orange said, in a video interview that appeared yesterday, that Apple is launching a tablet at the end of January.

The executive, Stephane Richard, is the No. 2 executive at the telecommunications firm. He told French journalist Jean-Pierre Elkabbach that the tablet will include a webcam and that Orange customers would be able to buy it. It’s a little hard to back pedal on this one, since it’s on video (in French).

The confirmation suggests that Apple is lining up a worldwide launch of the tablet, which means that it’s not just an experimental dipping of its toes in the water or something that will launch in the U.S. market only. Apple itself hasn’t commented on the existence of the tablet, which many see as a new generation of computers.