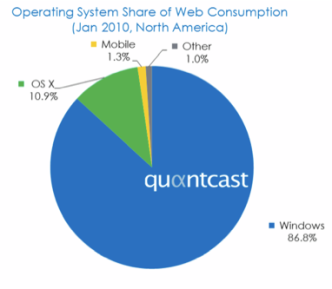 Further Quantcast data measured from the mobile web traffic of quantified sites, show that the Apple iPhone/iPod Touch accounted for more than 60% of mobile web consumption in January 2010 in North America. Apple’s share has been holding steady over the past year, but Motorola (likely due to the Droid) began to make a dent in the past few months. 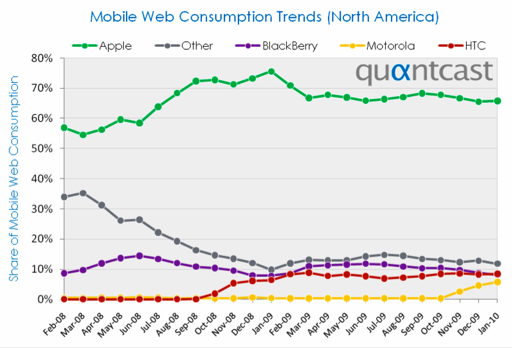 The global data represents a less rosy picture for Apple — Microsoft Windows accounted for 93% or more of web consumption in every region except Oceania, which includes Australia. 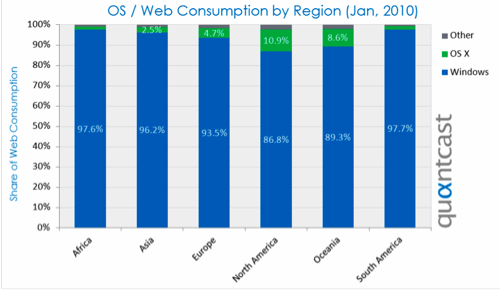 Quantcast’s co-founder and CEO Konrad Feldman said the data represents “virtually everyone” in North America. In fact, it represents everyone who visits one of the many sites that allow Quantcast to measure its traffic. While the list includes many leading ad-supported sites, it leaves out the largest sites on the internet, including Google, Yahoo, Facebook, and Wikipedia. On a global basis, Quantcast claims it reaches a billion people, which means the global data is most likely far more representative than any other measurement firm. Operating system usage share figures can vary greatly depending on the source, and Quantcast’s data is a welcome addition to the collection of data on this metric. The firm also goes into more depth on Windows versions and Apple OS versions.