But full autonomy that involves millions of cars traversing busy thoroughfares completely devoid of human oversight will likely be some time away. With that in mind, one Israeli startup is setting out to serve as a bridge to 100 percent autonomy.

Founded this year, Tel Aviv-based Ottopia is pitching itself as a teleoperation platform for autonomous vehicles. The startup was cofounded by CEO Amit Rosenzweig, formerly head of product management at Microsoft’s Advanced Threat Analytics, and CTO Leon Altarac, who previously set up the robotics and AV branch of the Israeli army.

“Our platform addresses all the core challenges in teleoperation, like network connectivity, safety, and cybersecurity,” Rosenzweig told VentureBeat. “And the feedback so far from key players is very encouraging.”

While part of its offering does indeed enable the manual control of vehicles by a remote human operator, the company’s pitch is more than that — it promises a hybrid system that relies on a human operator working in tandem with the car’s AI smarts during a remote intervention. It’s more about “collaboration” than handing full control over to the human, which means the human assists in the decision-making process in more complex scenarios while the AV’s sensors and controls execute the maneuvers.

Ottopia’s software isn’t quite ready for prime time — the company will have a pre-demo version ready by the end of Q1 2019, followed by a minimum viable product (MVP) by the end of Q3. But to help get the technology up to speed, so to speak, Ottopia today announced a $3 million seed round led by MizMaa Ventures, with participation from Glory Ventures, Plug and Play, and NextGear.

One of the ways autonomous vehicle companies such as Waymo train their software is by clocking millions of miles on public roads, thereby exposing vehicles to myriad situations — with human safety drivers ready to help. But countless unpredictable scenarios can trip up even the best-trained AV software, including awful road conditions, half-obscured obstacles, flash floods, law enforcement officers giving vague hand gestures or inaudible voice commands — or a combination of any of these.

So how, exactly, does Ottopia plan to help AVs when they encounter such situations?

The company said that the remote assistant may provide a new waypoint to circumvent a problem, instruct the car that it’s okay to temporarily cross over road markings to get around a blockade, or help the AV choose a new path based on multiple options. And, yes, the human can take full control if the situation requires it. But even in that scenario, the company said, the AV’s built-in safety mechanisms remain operational, which is crucial in the event the network suffers from low latency.

The last thing you want is for a pedestrian to step out in front of a vehicle just as a teleoperator’s network suddenly cuts out. 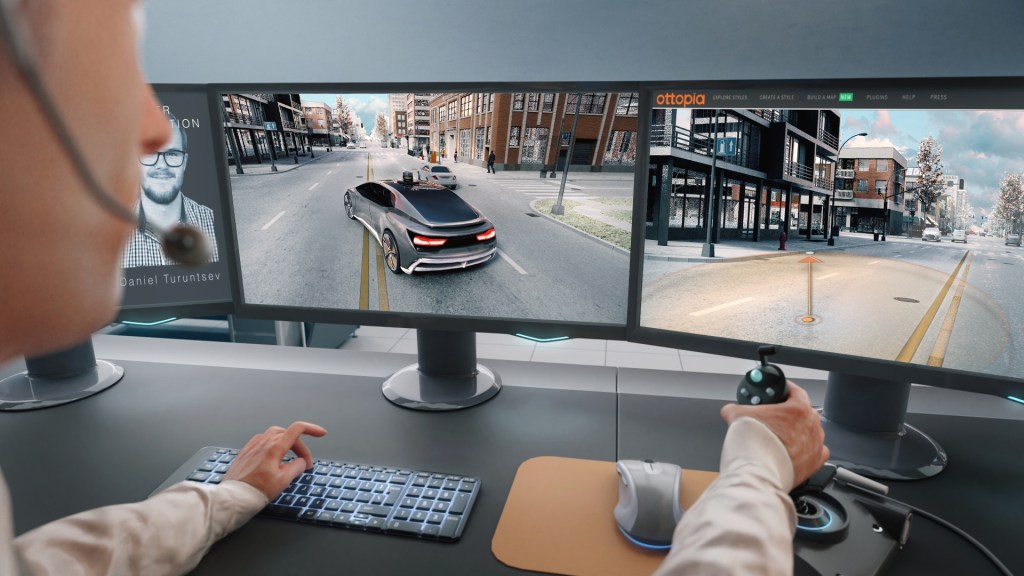 “My CTO and cofounder has personally seen more than seven accidents in the Israeli army over the last decade, when an operator teleoperated a vehicle and there was a latency build-up,” Rosenzweig said. “That is why we move away from ‘direct’ teleoperation and focus on building the smartest possible way to integrate and control the vehicle, keeping all of its safety systems in check.”

Though safety drivers are still commonplace in most self-driving trials, we are approaching the moment when level 5 “full autonomy” becomes a reality. Earlier this year, GM unveiled an autonomous vehicle with no steering wheel or pedals, along with plans to launch this vehicle in 2019. Swedish company Einride is developing autonomous electric cargo trucks that have no physical space for human drivers — they will instead rely on remote teleoperators as a safety measure.

A consensus is emerging, however, that even when level 5 autonomy hits the mainstream, the option of having a human intervene remotely will be needed for the foreseeable future.

Earlier this year, Menlo Park-based Scotty Labs raised a $6 million seed round from some big names, including Google’s AI-focused investment fund Gradient Ventures. The company’s sales pitch claims that “safe teleoperation subsumes level 5 autonomy,” rather than preceding it. Scotty Labs’ first product is a platform that enables humans to “virtually control cars in a highly dynamic environment,” according to company cofounder and CEO Tobenna Arodiogbu.

We fundamentally believe that any platform in the AV sector needs multiple layers of redundancy to succeed, and we provide that redundancy to companies building autonomous vehicles by giving them the ability to bring humans into the loop. This helps solve some of the hardest edge cases of driving, while allowing AV companies and their teams to focus on what they do best  —  building and improving their autonomous driving technology.

Other companies setting out to combat “edge cases” in the autonomous vehicle sphere include San Francisco-based Phantom Auto, which was founded in 2017.

One example that’s often trotted out when discussing the need for teleoperators in the autonomous vehicle realm is that of the humble elevator. Once upon a time, elevators contained operators who were paid to control them and, ultimately, give passengers peace of mind. Nowadays, most elevators just have buttons that people push themselves — one of which is for safety, so that people can beckon help in the case of an incident.

And it will likely be a similar situation with autonomous vehicles. Oversight will be required for edge cases, and it won’t be all that surprising if teleoperator is one new job that springs up as a result of self-driving cars — imagine entire contact centers filled with remote teleoperators, on standby to help thousands or millions of travelers across a city.

“Autonomous vehicles are inevitable, but safe deployment is still a core roadblock,” MizMaa Ventures’ Aaron Applbaum added. “Major players agree that there is a real, unmet need in this domain.”

With a fresh $3 million in the bank, Ottopia said it plans to invest further in research and development and to build more partnerships with autonomous vehicle companies that can test its software in the real world.