I have this habit that really annoys my wife. I store old stuff in plastic waterproof bins in my garage. I was cleaning out my collection of old papers and happened upon these precious old magazines. The covers and the accompanying stories show how astoundingly bad we, the media, can be at making bold predictions about the future.

I’ve shared some samples below of some of the worst predictions and otherwise amusing covers going back a couple of decades. Of course, I don’t mean to pick on any magazines in particular here, as they were really just reflecting the conventional wisdom of the time. I’ve made my share of lousy prognostications as well. But these are the ones that managed to survive multiple paper-weeding drives over the years. I savor them like some people collect old copies of the Saturday Evening Post. I hope you enjoy these classics and keep them in mind as you read the many stories predicting how next year and the coming decade will unfold.

These covers themselves give us a long-term perspective; my prediction is that we’ll be recycling these headlines or motifs again in the years ahead, with different circumstances and different companies. 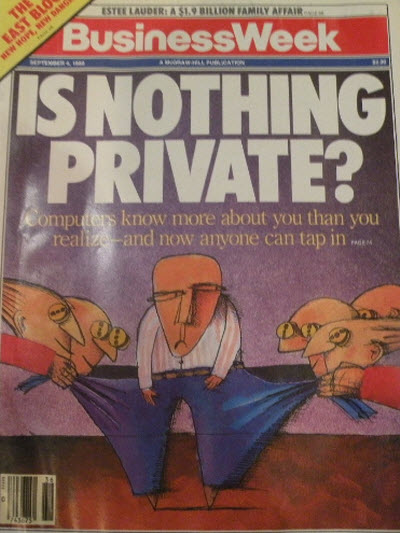 The headline “Is Nothing Private?” ran on the cover of Business Week on Sept. 4, 1989. It amuses me because, 20 years later, we’re running the same kinds of stories. The Business Week story chronicled how for very little cost, anybody could learn anything about anybody. But two decades later, companies such as Google, Facebook, and the credit bureaus have more details on us than ever. So the story wasn’t wrong. As Sun Microsystems honcho Scott McNealy once said, “You have no privacy. Get over it.” 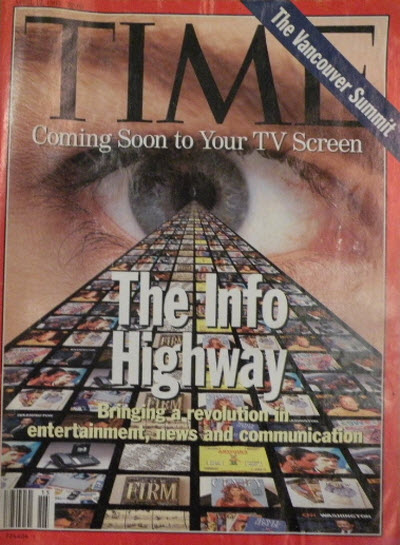 This article from April 12, 1993, was prescient in that it foretold a day when we could all take a trip into the future on the “electronic superhighway.” If anything, the article was a little too rosy. At the time, cable and telephone companies were wiring the country with fiber optic cable, but we didn’t know how long it would take them to get broadband into the mainstream. The article was also a little light on imagination as it foretold of 500 channels on TV. While that has come to pass for cable, we’ve also got an infinite number of channels on the Internet. I have to say I found the article inspiring. The author, Philip Elmer-Dewitt, is busily blogging today about Apple’s latest news. 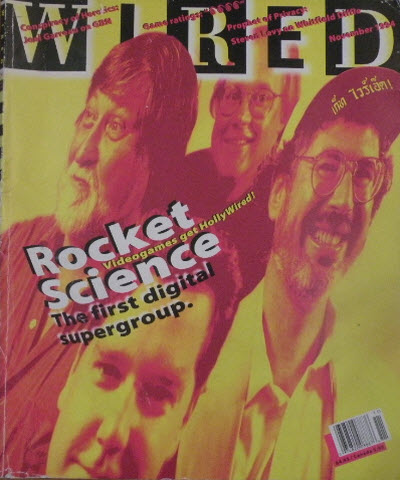 This article in the November, 1994 issue of Wired chronicled the rise of “the first digital supergroup,” pre-flameout. Rocket Science Games was supposed to be a marriage of Silicon Valley and Hollywood, a combination of video game and movie-making skills, all inside one company. It raised $12 million — a princely sum at the time — from Sega and Bertelsmann. But the hit makers couldn’t make enough hits. They went out of business in 1997. There are some super-talented video game development studios today, from Rockstar Games to Infinity Ward. But these rockstars were a little ahead of their time. 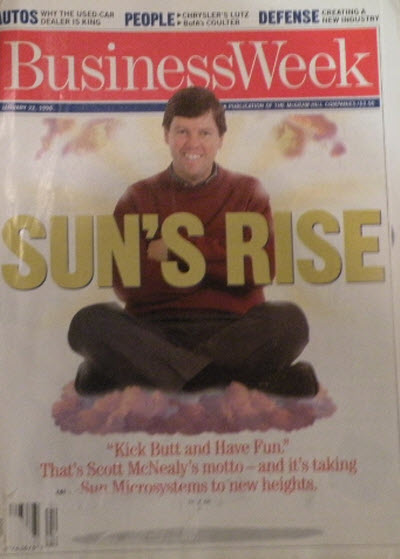 Sun Microsystems saw a meteoric rise in the 1990s as it launched Internet servers and adopted “We’re the dot in dotcom” as its tagline. Sun’s chief, Scott McNealy, ranted about Microsoft and graced a lot of magazine covers besides this one in the January 22, 1996 issue of Business Week. But the company wasn’t ready for the dotcom bust. As Intel-based servers took off, Sun’s own business began a long decline. By 2004, magazines were using the awful pun “The Sun Also Sets” in their headlines. Sun is now in the process of being acquired by Oracle, if the European Union will let it happen. 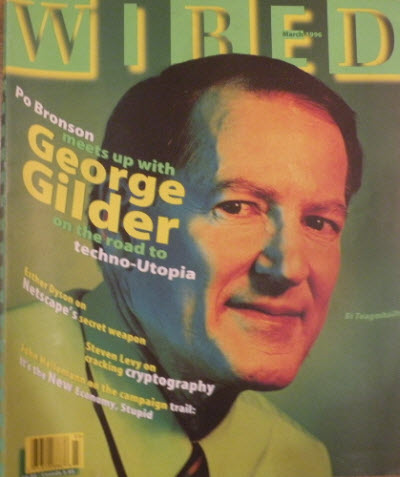 George Gilder rode the idea of the “telecosm” to punditry fame. The prognosticator and author predicted a broadband nirvana back when Wired ran this article in March, 1996. The telecosm (published first as a Forbes ASAP article and later as a book in 2000) meant that ubiquitous broadband would dispense with the need for operating systems, microprocessors, and all sorts of heavy-duty hardware in consumers’ homes. That is still coming to pass, and we’re not quite at broadband nirvana yet. But Gilder did later acknowledge that he stirred a lot of hype that led to the dotcom bust. The ideas of the telecosm still have currency, but they’re playing out in ways no one, including Gilder, predicted. 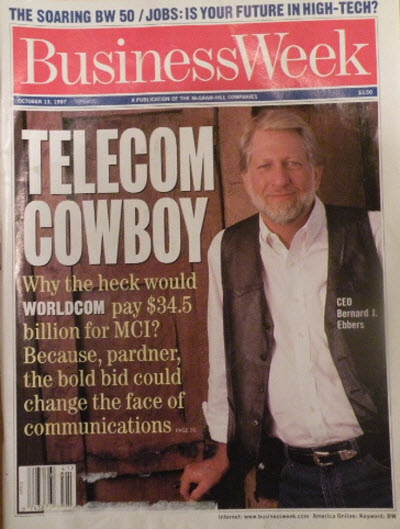 Little did we know that Bernie Ebbers, the “Telecom Cowboy” who parlayed WorldCom into one of the biggest telecommunications players in the world with its $34 billion acquisition of MCI, would come flaming down in an accounting scandal. This Oct. 13, 1997 cover on Business Week lionized the bold pardner who ultimately wound up in jail for fraud. It all unraveled and he was convicted of fraud related to WorldCom’s finances in 2005. Ebbers is serving a 25-year sentence. 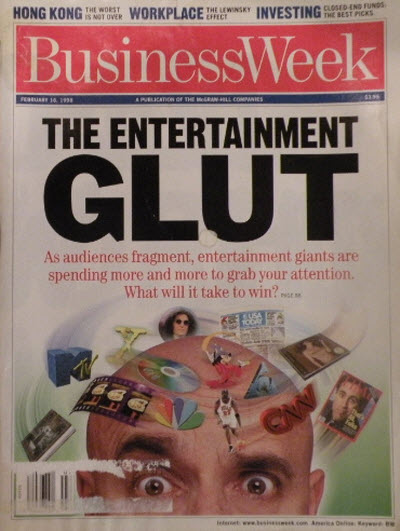 Business Week had the foresight to warn that fragmenting audiences, multiplying platforms, and the creation of entertainment giants was going to lead to a glut of entertainment. In February, 1996, this story predicted that the entertainment field had become too crowded, much like the Internet itself, with too many choices for consumers. But here we are in 2009, and we now have millions of Internet web sites, 117,000 iPhone apps, hundreds of thousands of Facebook applications, and more on the way. Somehow, despite the glut, we just keep getting more and more ways to entertain ourselves. A logical step, given the premise of this article, would have been to sidestep the entertainment industry in favor of other investments. But somehow, in 2009, the crowd is even bigger, as is the pie. And entertainment still seems to be a magnet for attention and money. It’s yet another reminder that it pays to have a good imagination in times of vast change. 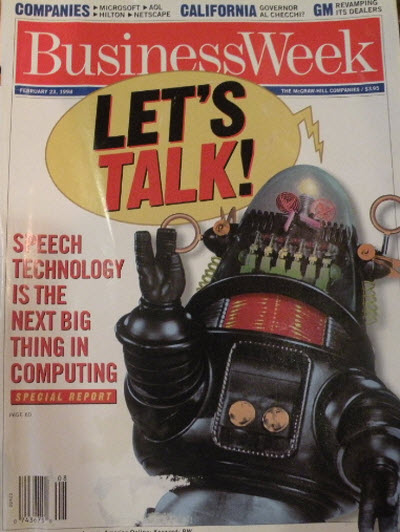 Speech recognition technology has been just around the corner forever. But I’m typing this story on a keyboard, our thumbs are sore from our BlackBerrys, and voice has only begun to trickle into various applications. This story from the Feb. 23, 1998 issue of Business Week identified the problems, but it was a little optimistic about the timetable. Speech works pretty well in applications such as Ford Sync, which lets you make cell phone calls with your voice or pick the songs you want to play in the car. But our tolerance for inaccuracy has gone down as well. I sincerely hope that perfect speech recognition is coming. 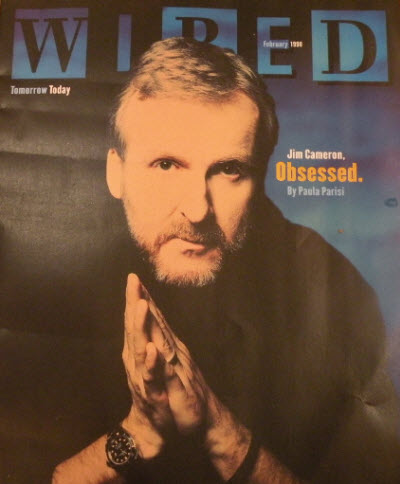 James Cameron has been obsessive about every film he makes. This profile in the February, 1998 issue of Wired caught him on the verge of the launch of Titanic, the biggest-selling movie of all time. It talked about how he was so crazy that he rented Russian submersibles and built special cameras to shoot a stunningly expensive film. The story wasn’t wrong, but it’s interesting to note how the story has come full circle to find Cameron once again the focus of so much attention, thanks to the huge debut of Avatar, which generated $500 million in revenue in its first 10 days. 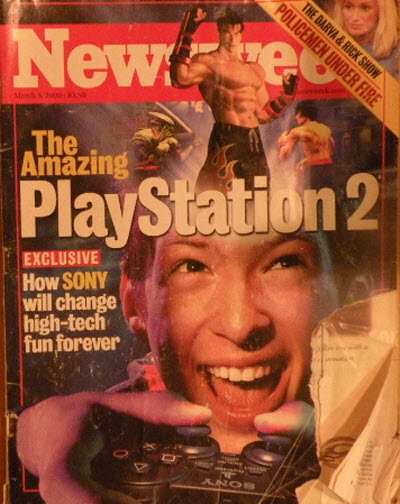 This March 6, 2000 cover of Newsweek captured a lot of attention around the globe. Sony sounded so arrogant in the story, yet it managed to sell more than 150 million PlayStation 2 game consoles over the course of a decade. It didn’t, as Sony’s Ken Kutaragi and others predicted, mean an end to the personal computer, which sold in the billions during the same time frame. But game consoles have indeed become portals for the web-connected home, and the story prompted Microsoft to move into panic mode. (The designers of the Microsoft Xbox 360 actually envisioned what kind of article they wanted Time magazine to write on its cover, as an inspiration for their design — and Time did put Bill Gates and the Xbox 360 on its cover). But times change. Now Sony ranks third place in the console wars, thanks to the cleverness of the Nintendo Wii and the over-pricing of Sony’s PlayStation 3. The story is fun to read, but it’s more a reminder of how big corporations shouldn’t come to believe their own good press. 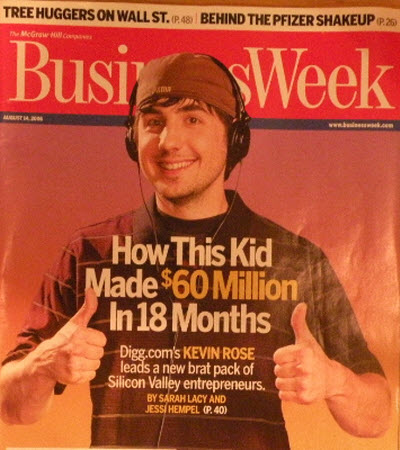 Silicon Valley graduated from the dotcom mess. Google had its IPO. Then it was time for the new Young Turks to have their turn. Business Week’s cover story of Aug. 16, 2006, anointed Digg as one of many Web 2.0 sites that could be the “new New York Times.” But the magazine missed its chance at being truly prescient, putting Digg’s Kevin Rose on the cover instead of Facebook’s Mark Zuckerberg, who got a smaller profile on the inside. But the article was right about one thing. Web 2.0 was big, Silicon Valley was back. 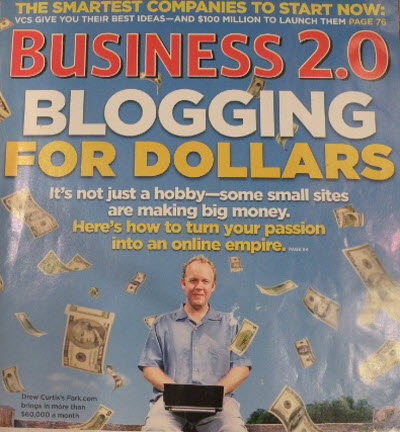 Not long before it went out of business itself, Business 2.0 got a whole generation of would-be media moguls excited about blogging with its September, 2006, cover story, “Blogging for Dollars.” It noted how Drew Curtis’s Fark.com humor blog generated more than $60,000 a month, and how Michael Arrington of TechCrunch could rake in $50,000 from a party. And the magazine did open eyes about how blogs could generate money through events or ad revenues. Of course, the odds of being so successful from blogging are slim. While there are millions upon millions of blogs, relatively few make real money at it. Technorati reports that most bloggers are hobbyists, and part-timers make maybe $14,000 a year. 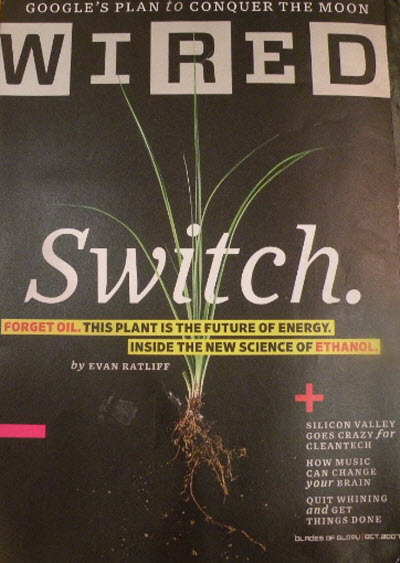 Our last cover shows how quickly sentiment changes. As oil prices were rising, ethanol’s future looked rosy. The October, 2007 cover of Wired magazine celebrated the shift toward cleaner energy, saying, “Forget Oil. This plant is the future of energy.” But with gas prices down and the green hype moving on to other sectors such as the Smart Grid, the ethanol craze has cooled off. It no doubt has a bright future, but perhaps not as good as the mirage suggested.