There are so many photo sites out there, it is easy to get jaded. But when the folks at Mountain View start-up OurStory dropped by the other day to give a demo, we liked it, can can see ourselves using it.

Like its name suggests, OurStory offers you a way to tell your life’s story by posting pictures up in a nice chronological order, scrolling left to right. See the diagram below (you can click on it to enlarge). You can organize your life by each year (or by other time periods, such as decades) and post the most relevant photos for that year. OurStory gives you an easy way to jot down commentary for what happened in that year, and/or what the photo signifies about it. That commentary pops up in a space below the photos. All this is contained on a page of a Web-based application, where you can store photos and other things. 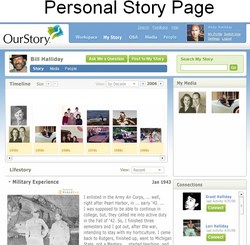 There are lots of features and doodads at the site which make it easy to share with other people. For example, you can let relatives or other friends comment on your story. In some cases, those relatives may give you insight about the event that you never knew about. In the example below, of Andy’s life story, you’ll see that someone who knew his father posts a comment explaining how Andy’s father was a terrific pilot, and exactly how he was terrific. 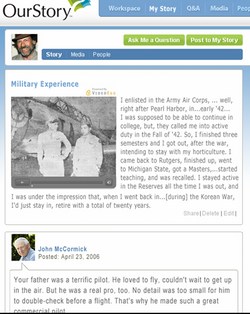 Beyond these basics, there’s a Q&A feature which lets you ping relatives and friends to ask them questions about events, and then helps you save their responses. And you can respond to questions your friends have. There’s an auto-search function, which looks for photos on the Web related to the event or topic of your life you are writing about. You can import video via VideoEgg.

The five year old company, which just launched publicly a few days ago, is backed by $6.3 million from Benhamou Global Ventures, El Dorado and Venrock. (OurStory was previously called Wisdom Ark, and we mentioned them earlier.)

The service if free, but charges you $39.99 for a “premium” version, which lets you create several timelines (if you want one version for your family and another for your workplace, for example), or if you want to create one to help a relative tell their story. The premium version also lets you keep it private, searchable by only people in your trusted network.

Halliday tells us he hasn’t seen any other companies offering a similar full-fledged social-networking life-story collection of photos. There are folks like Wisdom Legacy, which appears to have a religious affiliation, and Shutterfly is apparently going to introduce a life-story feature too, Halliday says. But he’s betting that OurStory’s focus will keep it ahead of the pack.

And there’s SnapJot, of San Francisco, which originally launched on Dec 5, to help people share vacation itineraries, vacation photos and videos, and backed at the time by $1.5 million in seed funding from angel Ron Conway and Amicus. But the company has launched again today with a product very similar to OurStory’s. It is run by Steve Douty, founder of Octopus Software, and Steve Zagerman, who previously did product development and engineering at Ofoto. Like OurStory, SnapJot wants to make money by helping you print and pubish your story, too.

Finally, there’s Tabblo, backed by Matrix Partners, which is also pitching to let you “tell your story.”